In this podcast, Colleen and Tim discuss the culture at ASU and
how he tries to make practice the best part of everyone's day, what he learned from working with Kelly Amonte Hiller & Scott Hiller at Northwestern, the ASU Offense and how they are scoring so many goals, his favorite drills, how he gets players to move off-ball, the
ASU defense, goalie and midfield units, their riding style and draw unit. He also shares his recruiting advice for high school players. Enjoy! 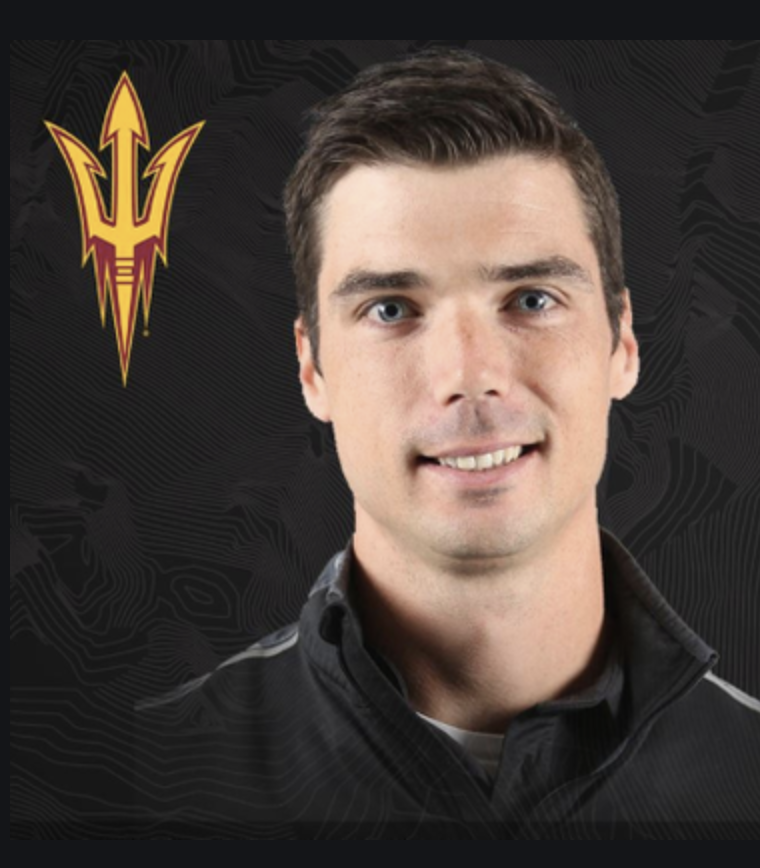 This is a drill I got from Jacksonville Defensive Coordinator, Chris Perzinski. It's a very simple drill that we have made competitive and utilize almost every day in practice.
Rules
-Every rep is a 5 v 4 with offensive players up top, on the wings, and at X.
-Add 2 new defenders from each side of the box on each rep.
-The ball comes in from the coach up top. Rapid fire!
-No offensive guys are on the crease which makes the defense ROTATE.
-No PASSING offensive guys off between zones. Stay on CARRIES and DRAGS and ROTATE!
-The offense wins if they score 3 goals. The defense wins if they get 6 stops. (Shots off cage can be no blood or count towards the D depending on how you're feeling!)
Coaching Points
-Being able to ROTATE on defense is critical for man down defense, transition defense, and 6 v 6 defense on throwbacks or adjacent slides.
-This drill simulates a 4 MAN ROTATION on man down where the crease is locked.
-It also allows you to be super comfortable shutting someone off on man down because you've been practicing a lot of 5 v 4.
-The communication: "ME/BALL", "NEXT RIGHT/LEFT", or "TWO".
-Defender on the ball takes an approach angle to the shooter's TOP SHOULDER. Match PLASTIC TO PLASTIC.
-Defenders one pass away are responsible for SKIP LANES.
-Defender two passes away helps INSIDE and anticipates the next rotation.
-The offense is getting work on ball movement, one mores, carries, drags, skips,  ball reversals, shots, fakes, deception, and the list goes on... "It's a simple game... but it's not easy!"

My PC girls had an amazing week with 3 big wins. This clip shows our 22-6 win where we had really great ball movement all over the field. We pushed the pace on the draw, we moved off ball and we put the ball in the back of the net. I barely had to coach them at all as they played very free and knew exactly where to move off of each other.

There was no moments where we held onto the ball for too long. We moved it to take the correct angle shot which was something we celebrated. The decisions weren’t rushed or forced they were free and fluid. The best past about this game was that so many different people scored and we had 14 assisted goals.

An aspect of lacrosse that makes it special is the ability to create amazing deception with your stick!  One of my favorites is the Gotcha Fake where a defender either thinks you passed or shot when you still have the ball or that you have the ball when you actually passed or shot!

Similar to a Hidden Ball Trick, if you fool someone it is often times a "Free goal."  Gotcha Fakes are free offense and they are not hard to do, yet not many players, men's or women's, use Gotcha Fakes.

How do Gotcha Fakes work?

Sick BTB Gotcha Fake from a Northwestern practice!  In women's lacrosse, when you get near the net and there is a defender right on you, Gotcha Fakes of different kindscan totally bail you out and help you get a shot off.  The defenders around you just stop and you can avoid the yellow card for actually shooting through the defender.

If you want to get great at Gotcha Fakes, the best place to practice them is on the Sandlot playing pick up games!  There is an interesting evolution that occurs.  Players begin to dabble in deception and eventually try Gotcha Fakes.  After a while, defenders won't bite on your Gotcha Fakes if you do the the same way, so players must get creative in how they do them, coming out of a roll back, BTB Fakes, Backhand Fakes, Jump Shot Fakes, etc.  This level of

This is an interesting inadvertent Gotcha Fake, that would work much better in Box than Field because the goalie doesn't turn around when the ball is behind.   See how the feeder pops his BTB out of the sight of the goalie and the goalie thinks he still has it.

BTB passes in general are great for setting up got Gotcha Fakes because defenders can't always see if you passed or not!

This was an epic Gotcha Fake in an Epic Final 4 Denver vs Notre Dame where both the on ball defender and the slider didn't know that Miller actually still had the ball.  This play was executed against one of the all time great college lacrosse defenses.  What does that tell you?  A, Gotcha Fakes can work at the highest level, and B, you just might need to pull out a Gotcha Fake to score against defenders at the highest level!

Look at the way NLL Wings Kevin Crowley uses the deception faking, looking and pausing to turn the head of his defender allowing him to beat his man cleanly.

Jump Shot Hitches are a great way to use a hard Pump to create a "Free goal" Gotcha Fake situation.

This is an interesting Gotcha Fake where the dodger fed the ball and spun at the same time which made the defender on ball think he was still dodging when in fact he had passed the ball.