Kevin Corrigan, Head Coach Notre Dame, KC and I go way back: he has been a friend, a mentor, a competitor, he recruited my son, I spent a summer with his son Will as my intern, and we love to talk lacrosse!  Kevin Corrigan is really smart, well read, and interested in learning as well as sharing.  We kicked off the conversation talking about ND fall ball and how there is a sense of normalcy on campus.  I hope all institutions will follow the leadership of Notre Dame!  The conversation turned to some really cool lacrosse topics including: how to teach the "Full Field" game, the process of understanding, reading, decision making and executing and how this works in riding/clearing, defense / offense and more!  We finish up with a great conversation about recruiting in the COVID era!  Click here to listen to the Kevin Corrigan Podcast 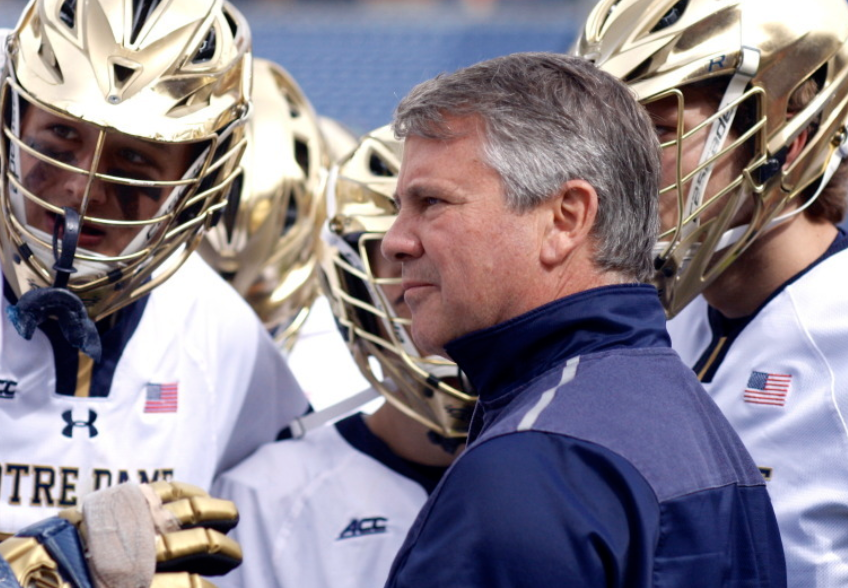 Matt Madalon, Head Coach Princeton, Matt is a great guy with whom I've always enjoyed talking lacrosse and this podcast was no different!  We kicked off the conversation about his lacrosse journey, his experiences, and mentors.  Matt talked about how much he owes to former Princeton coach Chris Bates and how tough and sad it was to see how things went down in 2016.  Of course, we talked about how GREAT the 2020 Princeton lacrosse team was led by Michael Sowers's unprecedented 9 points per game average and a supporting cast of excellent athletes and skill!  Such a shame that team (along with a lot of other teams out there) didn't have a chance to prove themselves!  As usual, we dive into offensive philosophy, 2man game, defensive philosophy and player development where you will find some incredible nuggets!  We finish off with a great breakdown of what Matt is looking for in players, position by position.  Click here to listen to the Matt Madalon Podcast. 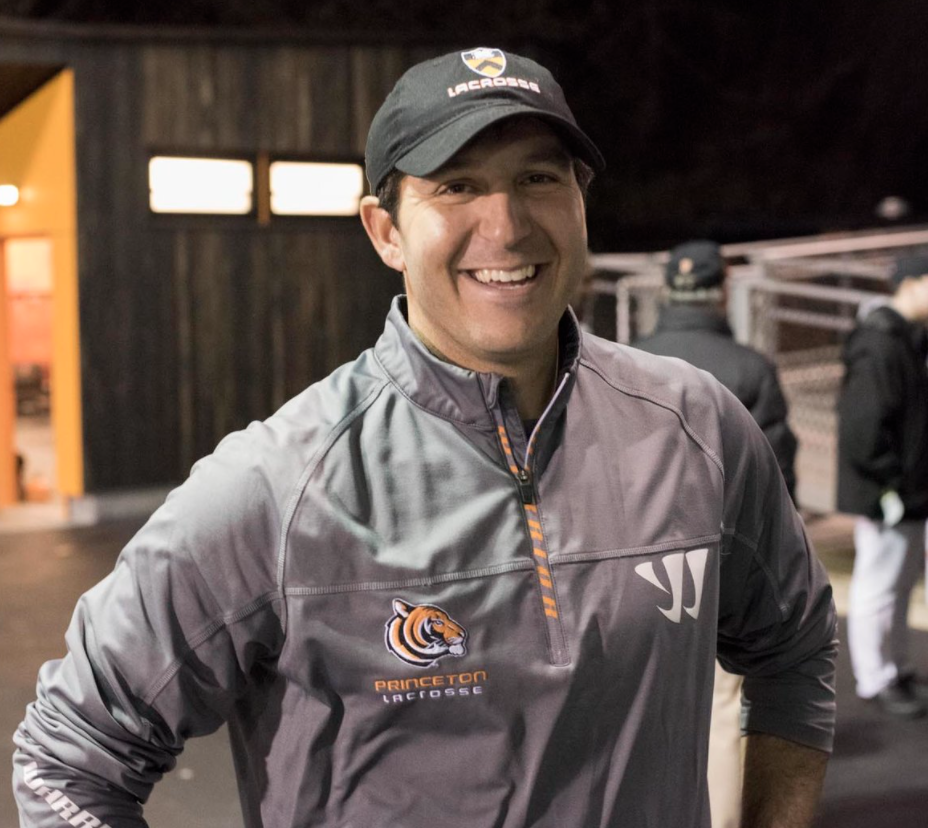 I am so excited to share with you all my passion for box lacrosse in this Solo Podcast.  I love box!  I could watch it, talk about it or play it all day long!  I don't know if I can definitely say I like it better than field, but I like it every bit as much.  The team work, passing, picking and creativity in box lacrosse is unmatched.  In this podcast I share my history with box lacrosse as a member of the MILL Boston Blazers, as a coach at the University of Denver where I built a program around Jr A stars, and the impact box had on my coaching philosophy.

Why is box lacrosse such a powerful environment?

If you are interested in box lacrosse programming, access to world class coaches, or how to get your son or daughter up to Canada, feel free to reach out to me [email protected].
If you want to read more about what it's like to have your son spend summers in Canada, scroll down!

I used to believe that if you broke down dodging into its parts and worked on / mastered those parts separately, you could successfully build them back up and achieve mastery.  I broke  down dodging into three stages:

The teaching model was to execute these techniques in a smart progression like this:

The breakdown of the skills makes sense and the ability for the athletes to learn all of these dodges was real.  The kids would learn and execute all of the skills!

Watch this video explaining the three stages in "The Life of a Dodge" from the 4 Coaching Secrets Webinar.

However, there are two problems with this seemingly smart model: first is that learning to execute the skills is not the hard part.  The challenge is to have the presence of mind or the capacity to recognize opportunities to use the skills.  Frankly, most serious players know how to do dozens of skills that they never actually use in games.  When we work on skills in isolation ,in a 1v1, or in any structured drill, we have removed the decision making from the equation.

The second problem is that when skills are repped in isolation or even in 1v1 situations,  there is no context of teammates or other defenders and the context is the key!  Context provides both challenges and opportunities.  In a 1v1 drill your goal is to score.  In a game, your goal is to create an advantage for your team which could involve scoring, drawing a double team, feeding, dumping the ball to X, getting defenders to ball watch etc.  The best players can operate in this context and create.  In the 1v1 drill, it's all about physicality.  When dodging in context it's all about control and deception.

Watch this video of Jeff Teat dodging in context, playing on the fringes of the defense, drawing them and faking them away, and ultimately creating an easy shot for his tteam.

If you follow my podcasts or blog, you know that I am always searching, learning, and recycling information on the game of lacrosse.  Amazingly, the more I look the more I find!  If you want to be a part of this journey of discovery, I encourage you to subscribe to the JM3 Coaches Training Program.

So how do we learn a repertoire of dodges if we're not going to use the Part / Whole Method?  The answer is through unstructured game play.  Watch the video below from pick up games with my JM3 Athletes where they are experimenting with moves, fakes,  re-dodges AND they're doing it without thinking about it.  They are also and maybe most importantly, experimenting with the context of help defenders!  The situations they are in are unique to that moment and the players are in a flow of read and react.  This is what I call Implicit Dodging.

If you want to learn more about how I train my own kids as well as my JM3 Athletes, check out BackyardCurriculum.com!  It will be the best $19 you ever spent.  Watch the video below if you want a virtual tour!

If you are interested in learning more about the JM3 Athlete program, email me at [email protected] and I'll put you on a waiting list for our next enrollment period likely in November.

What Princeton Men's Lacrosse is Looking Position by Position

Check out the video below from my recent conversation on recruiting with Princeton Head Coach Matt Madalon, where he breaks down what he's looking for in goalies, defenders, defensive shorties, "O" mids, and attackmen.    Knowing what coaches want is half the battle!

One thing Coach Madalon (and every DI coach) wants to recruit is SPEED!  How are you developing your speed?  Do you have a plan for this?

If you want a solution, go to LacrosseAthlete.com you can sign up to work directly with Mike and his MBSC staff of pros (exactly how my kids work with them).  For a limited time you will also get access to JM3 Academy content which includes the JM3 Attack/Midfield Academy, JM3 Defense Academy, JM3 Girls Academy and the Backyard Curriculum.

If you are not doing timed 10's YOU"RE CRAZY!  It is a guarantee to get faster!

Check out this email I got from my friend Tom Collard: 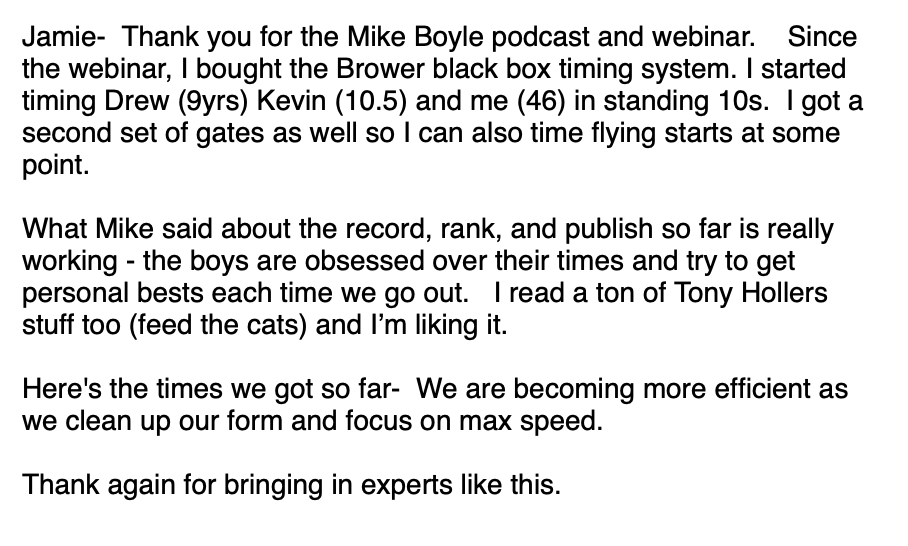 Along with this email, Tom sent over the records of all the times for each of them and I forwarded it off to Mike Boyle.  Here's Mike's response:

For more information on where to get Brower Timers, access to Mike Boyle's MBSC Strength and Conditioning program, go to LacrosseAthlete.com .  Don't wait! 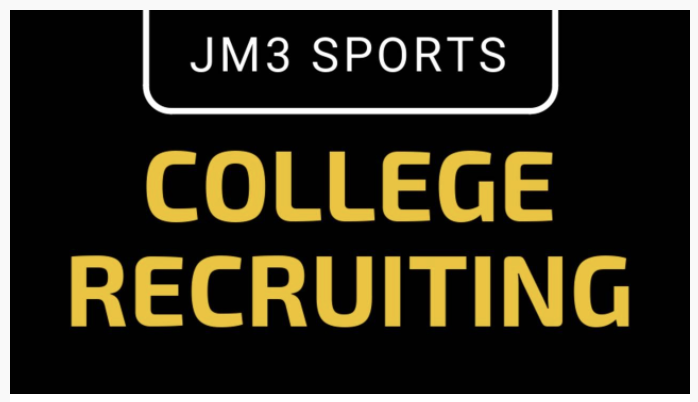 My wife is from Buffalo and her parents retired to Niagara on the Lake, ON which is the next town over from St Catharines.  I had a brilliant idea: Our son Colin could live with grandma and grandpa and play box lacrosse in Canada!  Sara's parents were on board, next we had to find a team.

Thankfully, Colin landed on the PeeWee #1 team with Head Coach Sean Allen.  Colin played five seasons with St Catharines and this was a game changer for him and Seanny has become one of my best friends.

Colin's St Kitt's team from back in the day currently has five kids who are pro players in the NLL and at least five more who will be pros when their college careers are over.  Just think of your your kid's youth team, then think about 5-10 going pro!  That's what minor lacrosse in Canada is like! 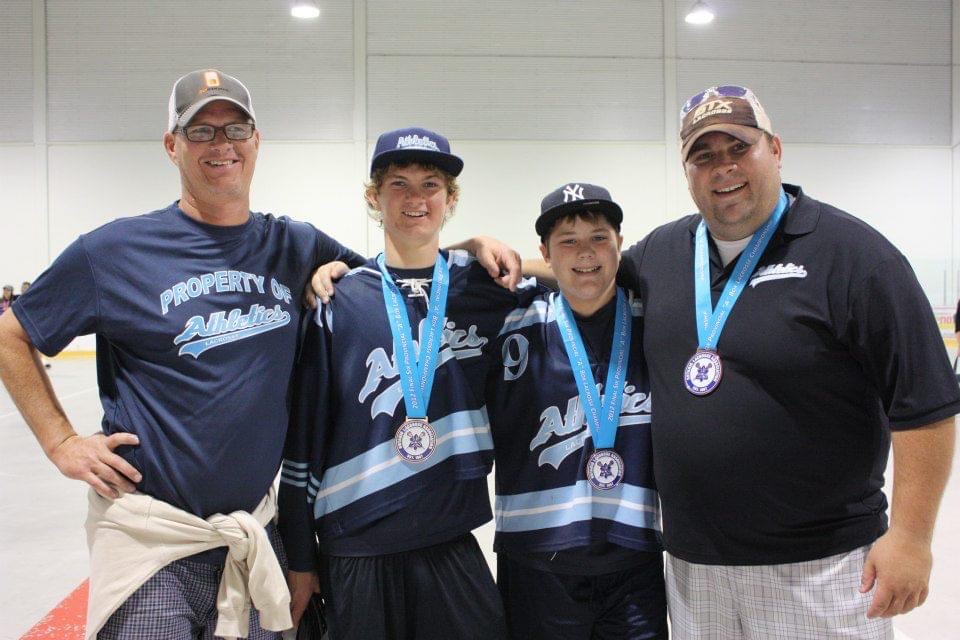 In Ontario once you finish playing Midget, which is a 15 & 16 year old league, it's on to Juniors, a 21 and under level of play.   In British Columbia there was a 17 and 18 year old Intermediate League which was a step between Midget and Jr's.  Intermediate was exactly what we were hoping for; great coaching from Pete Tellis, great players and great competition. One of the highlights of the summer for Colin was his first "Tilt" as you can see in the video below. (He's in the purple and gold jersey)

The Adanacs have been the class of the British Columbia Lacrosse Association since they won the 2009 Minto Cup, which is the Canadian Jr A Box Lacrosse National Championship.  With a great organization, minor program, coaching and funding, the Adanacs (In case you were wondering, Adanac is Canada backwards) were planning on pushing for a 7th straight return to the Minto.

The Minto Cup format is a grueling sporting event.  BC as the host Province entered it top two teams, along with Orangeville and Calgary, the winners of the Ontario and Alberta championships respectively.  A round robin is conducted to determine a 1st place bye, a 4th place exit, and a semi final where #2 plays #3 in a one game play in to the Minto Cup Final Series in a best of five.

Coquitlam, which was the 2nd seed in the West, won the Minto Cup Championship in overtime Game 5!  Colin became the first American born player ever to win a Minto Cup.

A big goal in the 2016 Minto Cup vs Orangeville 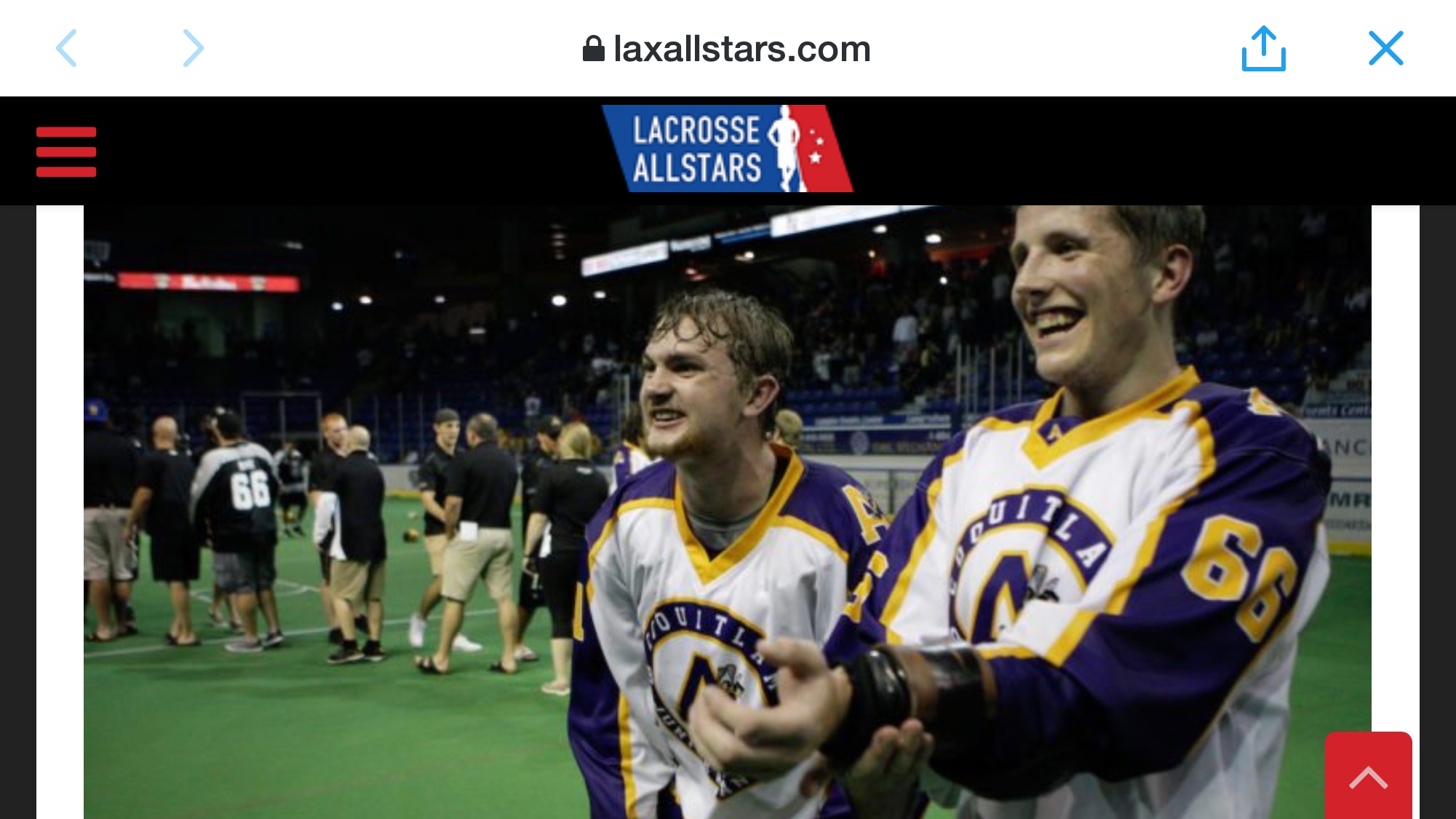 Pure Joy from the Adanacs after winning the 2016 Minto Cup!  First American ever to win a Minto!

In 2018 the Adancas found themselves back in the Minto with the best team they had had in years.  The 2017 team that was swept in the Minto Cup Final by Austin Staats and the Six Nations Arrows was too young to compete.  The 2018 team still had "The Phenom" goalie Christian Delbianco, an amazingly unselfish and talented offense, and the most athletic and well coached defense in the nation.

The Brampton Excelsiors were lead by the best player in Jr A, Jeff Teat.  Teat and Brampton ripped through the round robin with Teat scoring 14 goals and 14 assists in three games!  Are you kidding me?  It was insane!  Everyone thought Brampton would walk away with the title, but Coquitlam was better than people thought!

The Adanacs prevailed with another Minto Cup Championship in four games!  There was actually insane drama around this event with Jeff Teat and his dad, the head coach, suspended for three games, the suspensions being overturned, and the officials walking out on the event!

Watch all the Adanac goals from the 2018 Minto Cup! 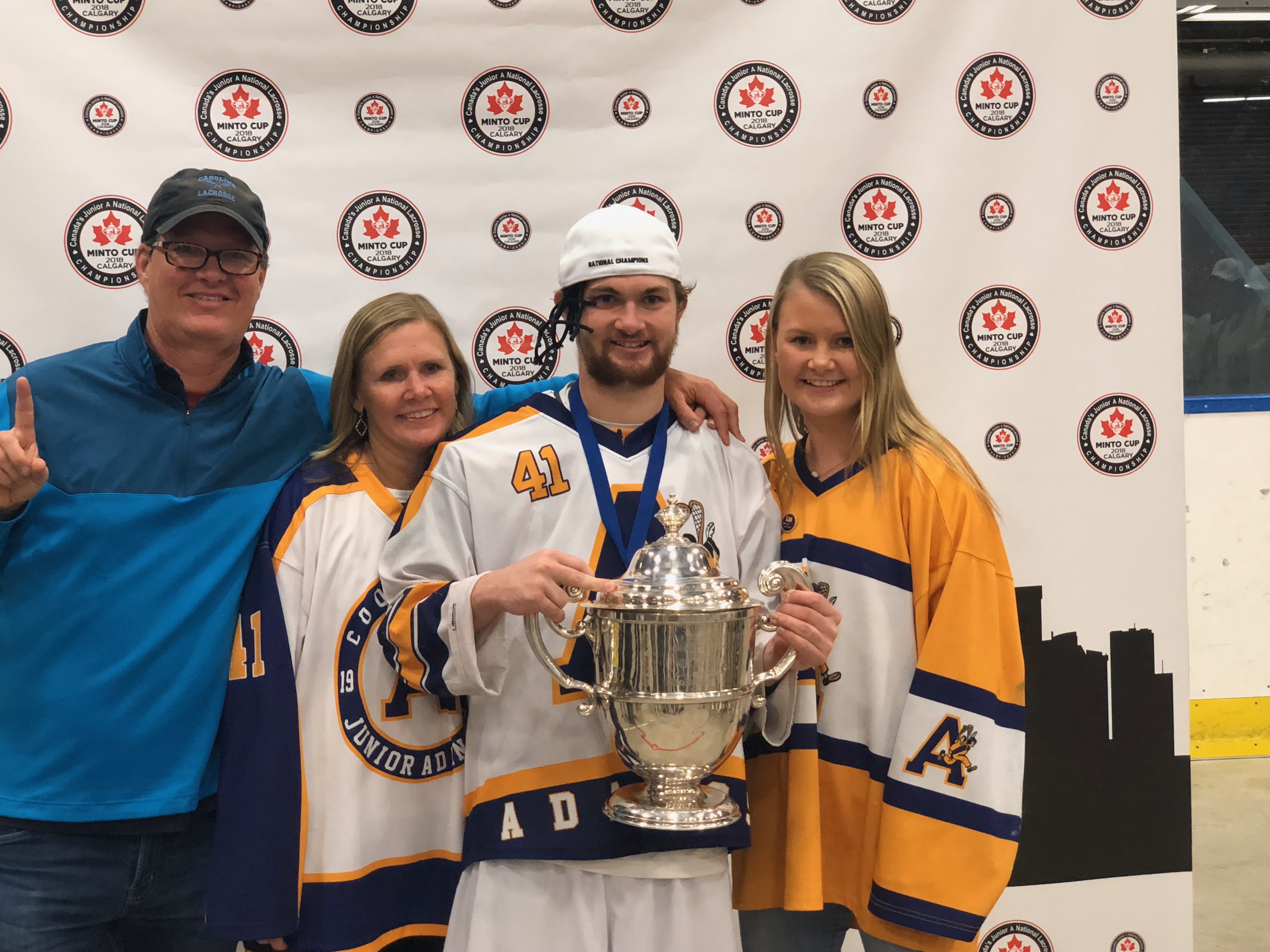 Playoff beard in full swing!  This was such a good time!  Not many can say they won two Minto Cups!