"In Season" Edition with PLL Chaos Head Coach Andy Towers is in full swing!  There's nothing I like doing more than talking lacrosse with AT.  His takes are thoughtful and often times hilarious!  Like when he said of Ric Beardsley doing the color commentary for the Syracuse-Colgate game, "You could smell the cologne right through the TV!"  We try and get a weekend recap of AT's top 20 every Monday by 5pm ET!

Inside The 8 with Colleen Magarity

This is a new podcast focused on women's lacrosse!  Colleen was a 3x National Champion and All-American at Northwestern, coached at Colorado for 3 years and helped get the program off the ground and into the NCAA Tourney, and is currently Head Coach at Penn Charter School in Philly and Director of HHH Lacrosse Club.  She's also a great person, mentor and friend!  There needs to be more women's lacrosse content and we are trying to ramp it up!

Here's what we covered in Episode #1:

College Lacrosse Recruiting: Colleen touched on the "X" factor every girl must have!

Special Guests: this week we chatted with UMass Defensive Coordinator Jana Drummond on the heels of their huge "W" versus Boston College. 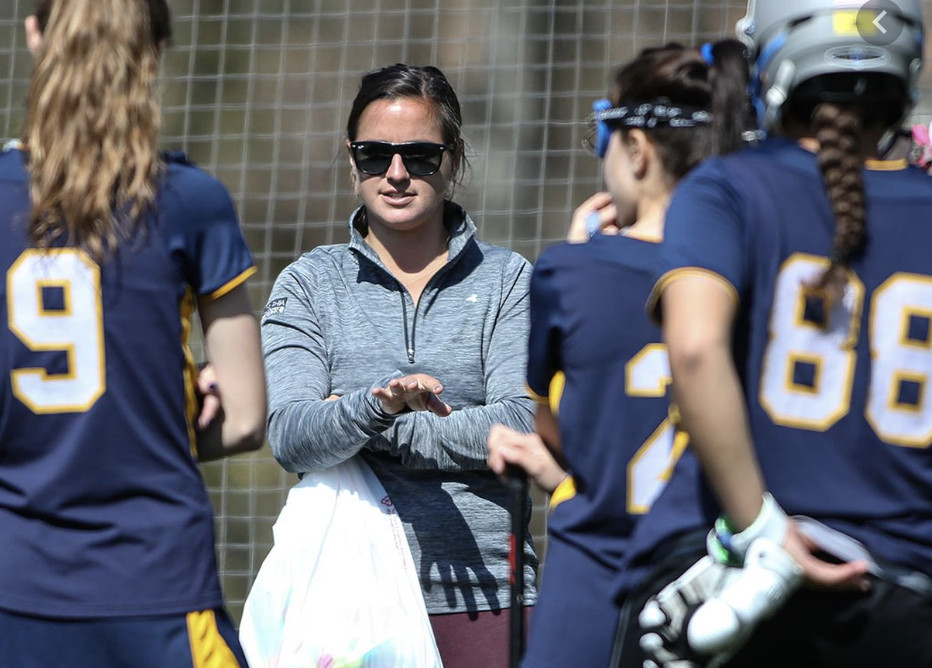 Click here to listen to the Inside the 8 Podcast!

I am constantly scouring the internet for interesting video clips that I can use to teach, learn, and share the great game of lacrosse!  This time of year is an absolute extravaganza for sick clips!  I hope you enjoy these and the analysis!

Getting Close To Your Man

The easiest way to beat your man, is getting as close to your defender as possible, get their feet to slow down or stop and completely eliminate their cushion.  This dodging posture with a low cradle I call Double Threat Position, is in my opinion the most impactful technique in the game because it controls defenders, backs them off, digs them in, and puts you in the driver's seat.

The late, great Kobe Bryant uses his Double Threat posture to get close and use a Jab Hesitation move to completely "Root" the feet of his man.  Counter intuitive in lacrosse, but but commonplace in basketball, if you jab hard (if you're close enough!) your man will shift his weight in the direction of your jab.  If you attack while he is shifting back, he's done!  I have come up with a sick "Punch Move" technique in this vein that you will love!

Setting up a Screen Shot

Another application of Double Threat position is perfectly executed by Zack Greer from the Seals game in Vegas.  Watch this clip closely and you will notice that when Greer realizes he has a shot opportunity, he sells his dodging posture to back defenders off setting up is shot!  This is a common technique used by Canadian box lacrosse players.

One of the advantages of playing super close to your man, whether squared up or posted up, is it is easier to fake your defender.  Here Crowley is using post ups, Double Threat, Hip Swivel Technique, and a sick "Gotcha" fake that turns the head of his defender.  Then Crowley easily swims his man to make a play.

This is such an interesting clip if you watch it closely.  The longer Noble can wait to execute his face dodge, the more the defenders have to wait, cringe and cover up!  It looks like Noble is arching his back as if to shoot a Twister Shot which actually creates an added delay.  Finally, you'll notice one defender gets completely turned around because Noble's Twister Face Dodge doubles as a Hard Pump that sold shot.  The morale of the story is to hitch, hitch, hitch and sell shot for as long as you can!

This video is what "Fluency" in the sport of box lacrosse looks like.  Here Austin Staats uses his Double Threat Carry to engage the switch, then he re-engages his own man by opening up to him so he has both defenders on the hook allowing Greer to roll to the net amidst defensive confusion.  Finally, before sliding a beautiful pass through the defense, Staats engages the goalie, making it so much easier for Greer to score.

We all saw this clip from the Super Bowl a couple of weeks ago, but I wanted to comment on a couple things.  First, the fact that he double faked the pitch is what made the play!  All defenders can react to one fake, but when you fake twice they bite hard!  The key here is the way Mahomes fakes early enough on the first fake to have time for the second fake.  Such a think of beauty!  The double fake concept applies in lacrosse in many ways!  Faking goalies, split dodges, and pumping through gaps to name a few!

Jack Kelly Fakes Through the Gap

Here's a sweet example Penn State's Jack Kelly Pumping Through the Gap which is very similar to Mahomes's Fake Pitch touchdown!  When a dodger is attacking towards a help perimeter defender and fakes a few interesting things happen: first, his own man both under plays him towards the help and often can't see if the dodger actually passed the ball and therefore will bite harder of fakes.  Simultaneously, the help defender will react to the fake just enough to get the dodger through the gap!

Last week everyone seemed to love the Spin Hook clip so I found another one!  This is NY Riptide's Jake Fox executing it perfectly!  Enjoy!

The Low-High Wind up

Canadians are known as the best shooters in the world (with some exceptions of course like Marcus Holman and Will Manny!).  While Americans are worrying about mechanics, Canadians are learning deception.  One of the most common deceptive shots you will see in Canadian Box Lacrosse is the Low-High Wind up which is a deadly technique!  This technique will hold a goalie up, creates a hesitation in your release, and allows you to use deception of both the "Where' and "When" in your shot release.  here the shooter holds the goalie up and yanks it down.

This technique is money in women's lacrosse on 8 meter shots.  Here the shooter holds the goalie up, then leans down and throws it stick side high.  Watch the goalie's stick.

Want to learn how to teach or learn all these skills?