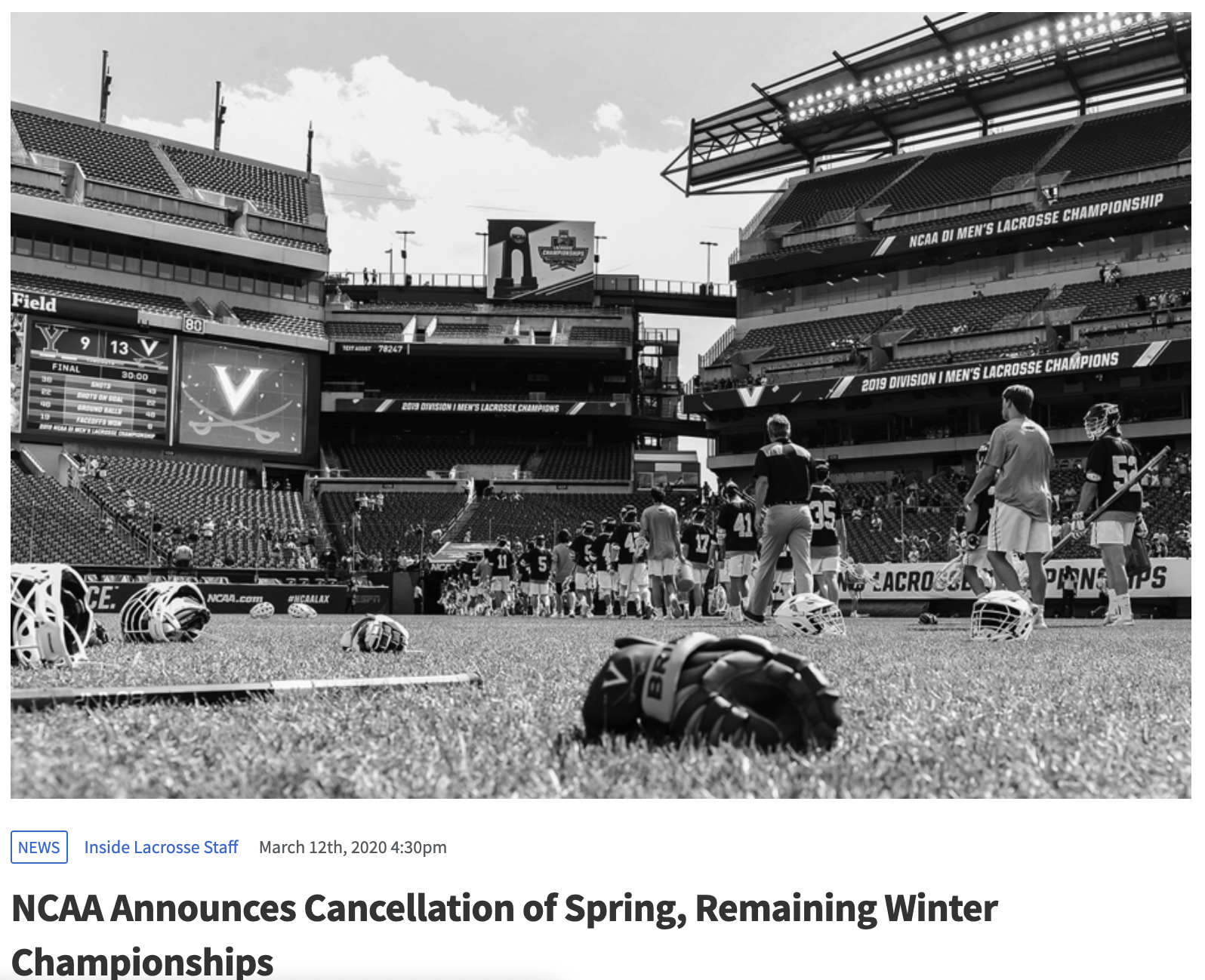 A lot has changed in a week.  For the first time ever, there is no lacrosse on a March Saturday and we are all sitting here bummed, pissed, scared, numb, and thinking of what might have been.  It seems like a lifetime of events happened over just a few days.  I join all of you, who are fans of the game and who have family members who have had their seasoned whisked away, feeling empty today.

My son's Georgetown team would have played Carolina today in an epic battle of unbeaten teams.   My older daughter is at Arizona State and they were having a great start to the new coaching staff's regime.  My youngest daughter is a junior in HS and I'm one of the coaches.   We had a game on Thursday night which I hope wasn't the first and last.  Our team is a special group of talented and enthusiastic girls who are by the way slick as hell!

Friday's NCAA declaration that every spring sport athlete will get their eligibility was much needed good news when a lot of folks were devastated and pissed off.  Personally I am torn about this decision.  On the one hand, I'm ecstatic that my son will get his junior year in college back (my ASU daughter was redshirting anyway). On the other hand, my 2021 daughter who is committed to play Division I Lacrosse.  Now, all the recruits in the classes of 2020, 2021, and even 2022, are going to be stuck in a log jam of talent as four years of current college player have essentially re-classed!

Below is a video from our Facebook Live yesterday.  I think you will find this informational, enjoyable, and some great lacrosse content and conversation!  We talk about what Harvard is doing, the NCAA declaration, but mostly we talk lacrosse!  Enjoy!

Thoughts on The NCAA Eligibility Declaration

One of my favorite players I've ever watched is Cornell's senior Jeff Teat.  I've known him (and his dad) and watched him  since he was around 14 and have always been amazed with the way he plays.  A mild mannered, nice kid, Jeff is a maestro.  His "Fluency" in the game is what makes him great.  He simply knows what to do and how to navigate situations in the most brilliant and creative ways.  He's more athletic than he gets credit for, but he's not big, maybe 5'11'' 165?  He can beat you 1v1 with an effortless ability to soak physicality and deception.  His feeding is other worldly.  And his shooting is absurd and is not appreciated in the United States to the degree it should be.  In this country, shooting is all about range and mechanics combined with accuracy.

Jeff Teat was MVP of the Major Series Box Lacrosse League this past summer, as a rookie!  He's literally playing with the best players in the world and was the MVP of the league!

Will Teat take a 5th year?  He will certainly be the #1 pick in the NLL draft.  I wonder if he would want to go play box?

I hope you enjoy this Jeff Teat 2020 highlight video! My boy Rocco Romero put this together and has classic Rocco tunes!

What Do We Do Now?

As it turns out, JM3 was ahead of the curve on focusing on digital content, remote coaching, etc.  The whole world is going to make a switch to more remote learning and having quality content is critical.

I have received many emails and texts from JM3 CTP subscribers who are happy to have content for their players to be able to work on their own during this shut down of high school and youth lacrosse.

As we consider ways to help our kids continue to play the game they love, let's make sure we are being socially responsible.  Ignoring social distancing to get in reps with other kids is not the point here.

This package gives all of your coaches, players, and parents access to the deepest content treasure trove on the internet, bar none.  All subscribers get men's and women's content for coaches (it's a 2 for 1 deal you can share with your counterpart), all academy content which are a 10 Chapter program designed to teach every variation of every skill, as well as the corresponding libraries.

Check out the videos below for a walk through!

Have a great and safe weekend!