Sean Kirwan, Offensive Coordinator Virginia, is one of the brightest offensive minds in college lacrosse!  This conversation will not disappoint!  We talk about NBA basketball, and how Hostage Dribble  can be an effective counter to a pick defense called Ice!  (I work on "Hostage Dribble" with my JM3 Athletes and it's becoming a game changer!)

We talked a lot of PLL and MLL lacrosse, discussing some of the game's best players and what makes them great!  We finished up the conversation talking about recruiting in the COVID era.  There are a lot of things Sean is looking for in a player, but one of the most important and interesting is a player who can see the field.  He looks for players who know what they're going to do before they get the ball and ID's this through one touch passes and quick decision making.

I hope you enjoy it!  Click here to listen to the Sean Kirwan Podcast!

Jack Emmer, Hall of Fame Coach, at one time the winningest coach in NCAA history and the first coach to bring three different programs to the NCAA Semi Finals.  Jack Emmer has always been a coach I have looked up to.  Always gracious, always willing to give his time to me as a young coach, and always willing to play me (when I was at Denver) at his place haha!  Jack was an innovator!  Learn how jack came up with the idea for the "Armadillo" in 1982 vs North Carolina or how he started riding with nine long poles in his 10 Man Ride in his early days at Army.  I hope you enjoy this podcast.  Click here to listen to the Jack Emmer podcast!

Check out the pic below of the Armadillo! 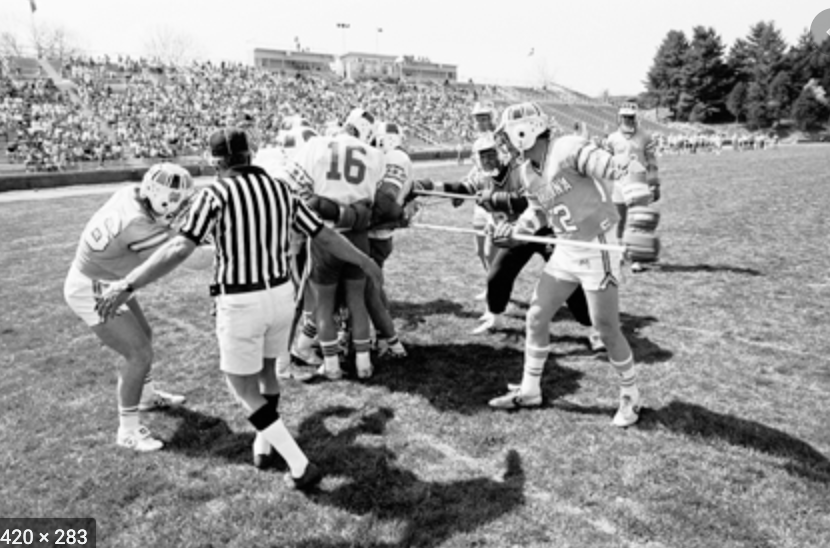 The fact is, I have completely changed the way I view the word!  If you want to hear my podcast, Click here.

As you can see, a dictionary definition below, "Forming a necessary base or core, of central importance" or "basics, essentials, etc" 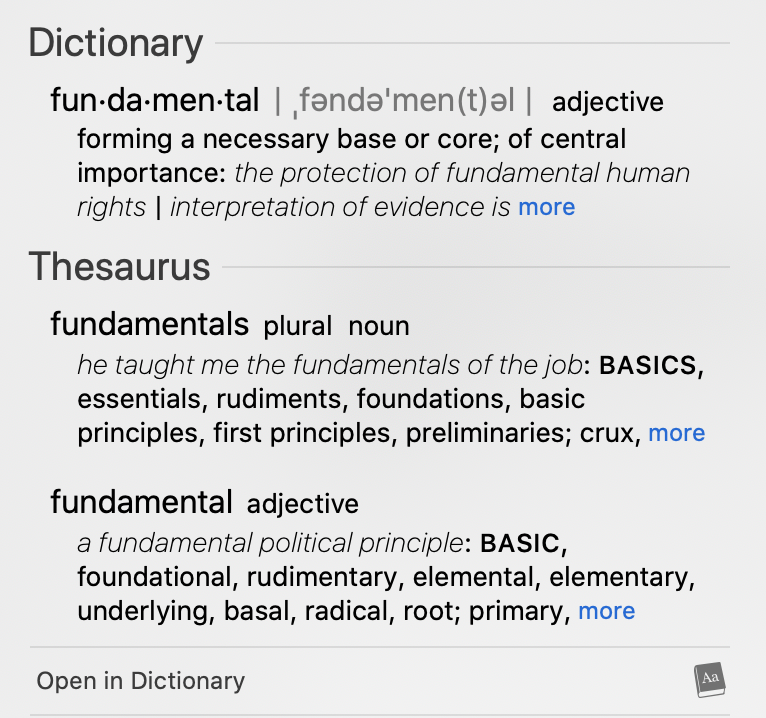 These common fundamentals are actually, in my opinion, "Fake Fundamentals" because these techniques are either not true or not always true.  For example, how can you pass overhand when a defender's body or stick is in your way?  You will have to throw it around the defender sidearm.  I would argue that most of the time when it matters, an overhand pass would be more likely knocked down.  How can this be fundamental more than a side arm pass?

What if a loose ball is near the side line?  Should a player scoop through the ball and run out of bounds or quickly rake it and gain possession.

Sure we need to be able to pass and catch on the run, but to emphasize "Run through the catch, run through the pass" is emphasizing a situation that isn't more important than setting your feet (winding up) to pass or to catch.

This play doesn't happen if Austin Staats is constantly told not to set his feet and run through every pass and catch.

It's not that these "Fundamentals" are never true!  Of course running full speed on dodges is important, but it's no more important than changing speed!

Changing planes on a shot can work because of the natural deception involved with swing angles, but a Leaner is a money shot! A Leaner is a High to high shot where the body posture of the shooter sells low near side while shot goes far, high.

Check out the Leaner below on a 8 meter free position shot.  if you want to learn how to shoot this shot, check out the JM3 GIrl's Academy!

Keeping your "stick to the outside" and being "equal lefty and righty" are two of the most detrimental "Fundamentals" on the list.  These two will have an adverse effect on the development of players.  Listen to my podcast titled, Handedness to learn more, but in a nutshell, the name of the game is getting to the middle and shooting with your stick to the middle.  Forcing players to always have their sticks to the outside is literally one of the worst habits you could teach them!

Watch this video of Jeff Teat breaking the fundamental rule of stick to the outside has he dumps the ball to X with his inside hand, drawing defenders because of his threat to shoot.  This is a great play and more effective than dumping it to X with your outside hand where th defense can read  your intentions and recover.

As for the "Be equal lefty righty" concept, it sounds great, but what it does is reduce a player's ability to have a feel for getting to their strong hand.  Think of the lefty attackman who always gets his left, despite the opposing coach yelling, "He's all left!"  This player can split right and roll back left, rocker to the topside, spin underneath and still get his left, Z dodge and re-dodge continually getting to his left.  The ability to do this far outweighs a need for two handedness.

Fundamentals Are Not Skills

I have come to the conclusion that any Fundamental Skill must be a Fake Fundamental, because there is literally no "one size fits all" skill.  In fact, fundamentals aren't skills at all.  Fundamentals are concepts!  Instead of making players learn a particular skill that you think is critical, but is only applicable in a certain unknown percentage of the time, have your players understand and even abide by concepts and leave the skill choice to them!  There are dozens of great ways ways to pass, to shoot, and to dodge.  There are a dozen different hesitation moves for that matter!  Why would we ever pigeon hole a player with one way that definitely won't work much of the time!

Below is a list of 10 Fundamental concepts I think are universally applicable that will help your team play good lacrosse and allow your players to figure out solutions for themselves.

Here's a video using stats from the late, great Dave Huntley on a study of 15k shots from MLL lacrosse in 2015-16.

Shot Selection might be the simplest indicator of good coaching.  Teams that take a lot of poor angle or 13 yard plus shots a squandering opportunities.  Most coaches in Division I lacrosse are moving away from the Alley Shot, because it is a low percentage shoot compared to a shot with the head of the stick to the inside.  Distance and angle are critical in determining a good shot, which is different for every player.  Instead of worrying about what technique a player uses, worry about shot selection and you will be in good shape!

GBO or Ground Ball Offense is a part of thee ball movement fundamental that every player should learn.  Sure, a player may pick up a loose ball and have a breakaway to the net, but the habit of moving the ball off the ground is great lacrosse

I often say deception is the difference between good players and great players, but in evolutionary Darwinian terms, deception is a matter of life and death!  Yes deception is part of Survival of the Fittest and is natural as free play itself, yet our teaching of Fundamentals actually eliminate deception in favor of learning fundamentals.  In the animal kingdom there are hundreds of examples of animals that use mimicry, camouflage or other deception to survive.  In sports, deception is similarly critical.

In lacrosse and all invasion sports, the defense is watching your every move.  The best players, the most fluent players, actually communicate non verbally with their opponent, sending false cues which actually cause your opponent to work for you!  Deception is posture, it is sick fakes, it is where you're looking, what you're saying, and so many other things!

Watch the video from this past summer!  The deception in these pick up games is off the charts.  I broke down about 60 hours of video into categories like "Fakes."  I want to tell you that there wasn't any skill coaching going on in these sessions with family, friends, and JM3 Athletes.  There was playing!

Check out the Backyard Curriculum if you would like your kids to learn how to play like this!  It will be the best $19 you ever spent!  It's sick!

I was thinking about "Possession" as a JM3 fundamental, which could be a good one, but I decided to go with "Handle Pressure" instead.  If a team can pass, catch, and shoot under pressure, it is a pretty good team.  On the flip side, learning to apply pressure on the ball or on adjacent passes is also critical.  If a coach would simply give his players the environments where they learn how to apply and handle pressure, the players will eventually figure it out!

Check out this 4v4 Double Team Drill from the JM3 Coaches Training Program.  It is one of the best ways to work on applying and handling pressure!

Physical Dodging, initiating contact and turning the corner can be done in many ways, but is an absolute fundamental in gaining and retaining angle.

I put power and accuracy on the list more for passing than for shooting.  Most players don't have the ability to crank passes and are not used to catching passes thrown like this.  I think you'll find players will feel more comfortable cranking passes underhand, but does it matter?  I think not!  Look at Grant Ament!  He feeds underhand like that constantly.  Don't worry about how they do it, just make sure you're cranking passes!

Check out this sick crank passing 4v3 drill from the JM3 Women's Coaches Training Program that focuses on wind ups and drags while the girls read and manipulate defenders trying to rip skip passes through the defense.

Seeing the field is definitely a fundamental!  Click here to listen to my Flying Solo podcast on this topic!  Seeing the field is knowing what you're going to do with the ball before you get it and seeing sliders, 2nd sliders, outlets and teammates when you're dodging.

The ability to play with another player is a fundamental, which is why 2man game made the list.  Give and go's, making space for a dodger with a Fade, Clear through, or shallow cut, picks, slips, mirrors, flips/fake flips, and seals are all a part of this concept oriented fundamental.

If you haven't checked out 2mangame.com you should!  It is an amazing breakdown of how 2man game works!

Draw and Dump is a fundamental.  The defense wants to play "Monkey in the middle" by staying in the middle while the offense wants the defense to commit one way or another.  Really the fundamental should be "Fake, Draw, and Dump."  Yale Head Coach Andy Shay talks about this in his Transition Rules on my Phi-Lacrosse-ophy Podcast with him,, where he states "Get ahead of the ball, if you're covered move it, if you're not covered, get covered ASAP"

Watch the clip below from an NLL game where the feeder winds up and face dodges the 2v1 completely drew the defender and setting up a backhand feed.