My great friend and "Wolfpack" member Mark Blake asked me a few months ago if I wanted to see The Who, front row seats, at Fenway Park on Friday night September 13th.  "Hell yes!" was the obvious reply and from there I got started planning what became an epic trip of visiting college Lacrosse programs.

BU was was still in there 8 hour per week practice mode and was doing 1 hour skill sessions.  It was great to catch up with Ryan Polley who has done a marvelous job building this program from scratch.  Coach Polley is fired up for this season and feels lie he has great young talent. 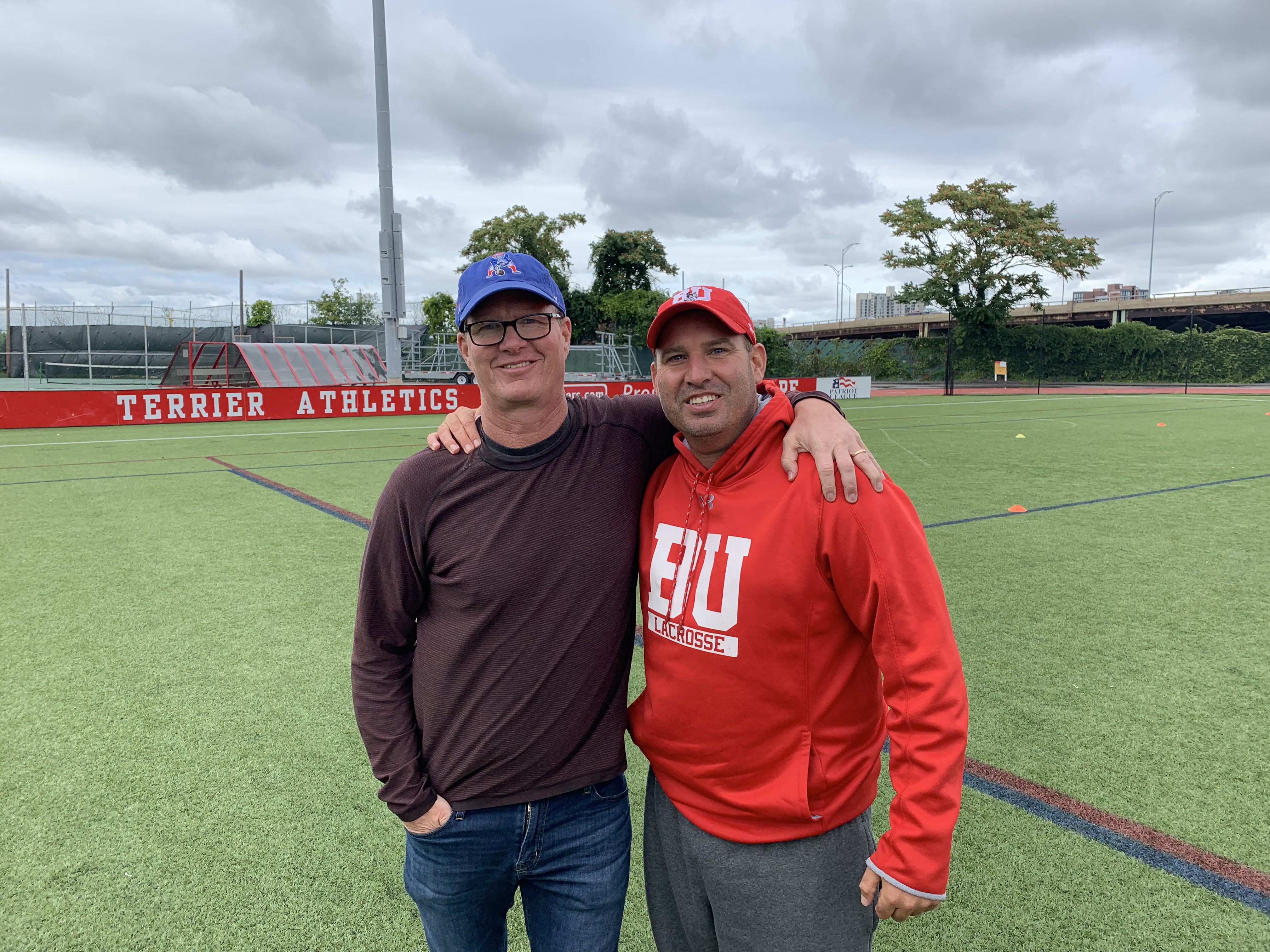 The offense was run by Mike Silipo, one of the brightest young lacrosse coaches (and SICK hoop players) out there.  Mike was working on the passes, the dodges, the shots and movements of his 'Cuse Motion offense which is a four man midfield motion and a two man attack motion.  This is a pretty cool wing variation of what I call "Bling-Bling Shooting" which I loved!  Rapid fire reps!

I spent the day in the Harvard Lacrosse Office and although they didn't have practice, I got a chance to watch Coach Byrne in action, do a live podcast with him, and be around a great staff with assistant coaches Neil Hutchinson, Will Corrigan, and Ted Bergman.

Here's the recording of our Live Podcast from Facebook.  It's a really fun conversation! have a listen!

I had never sat in the front row of a concert before and I can say only that it's absolutely incredible!   And I think it might ruin all future shows when I'm not in the front row!  Pete Townsend could still jam and Roger Daltry's voice was still as powerful as ever!  The band played with the Boston Philharmonic Orchestra and the sound was incredible.  They concluded the show with the timeless Baba O'Riley and a sick instrumental by the violinist from the Orchestra!

When I told my great friend Dave Jenkins that I was headed to The Who on Friday night, he told me he had 12 tickets to the owner's box / floor at Fenway the very next night to Billy Joel and asked if I wanted to go.  "Hell yeah!" was my obvious response!  Jenks also invited Gerry Byrne, who as a Levittown guy of course loves Billy Joel.  Here's a picture of Byrnsey winning! 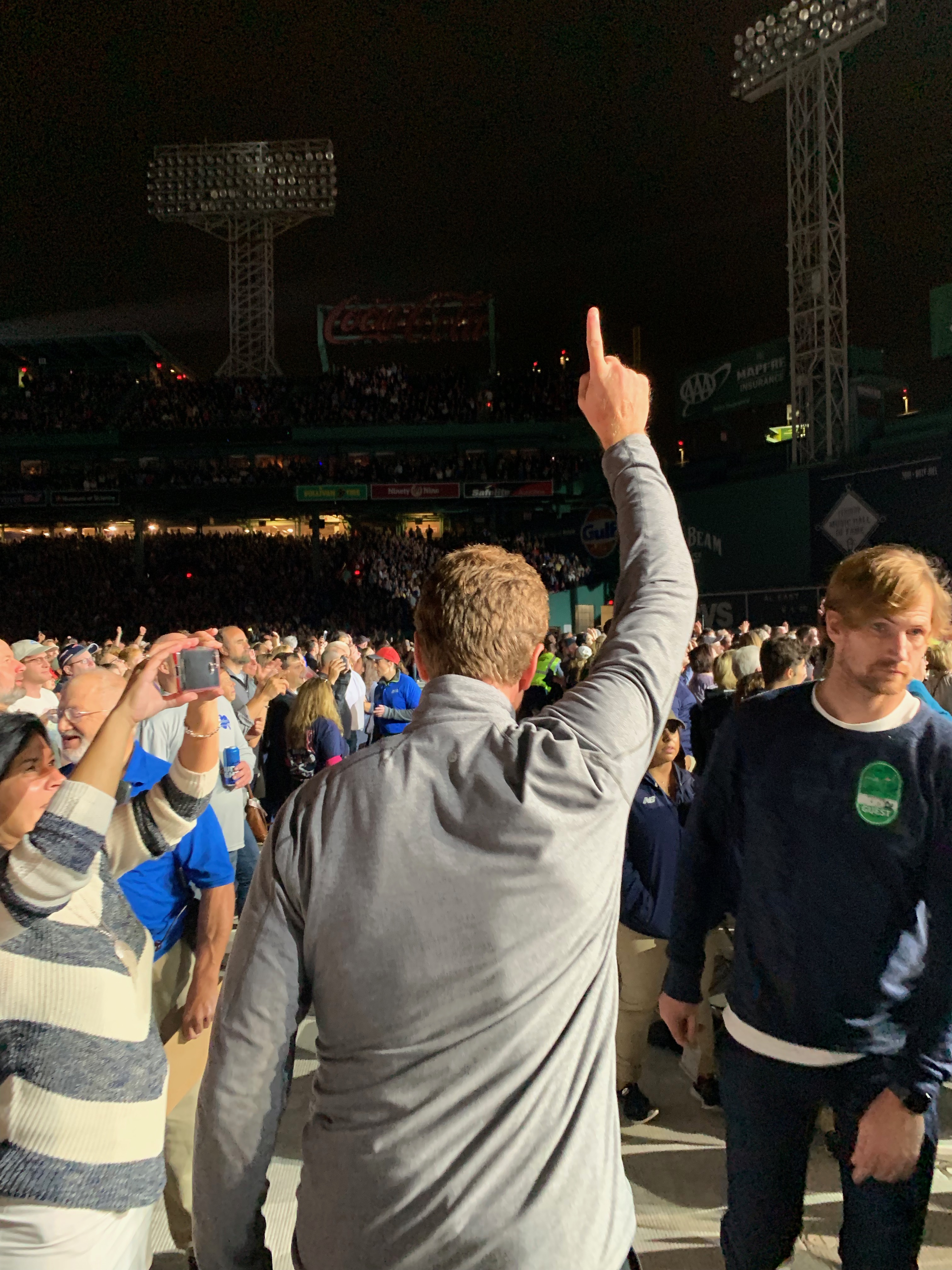 I spent a couple hours at Brown with the coaching staff mostly talking about a new two man game concept that I call "Hang up Two-man."  It may not be new to you, but it's new to me.  Whereas traditional two man game teaches good pick angles and attacking the middle, this model focuses on trying to get two players committed to the ball carrier or two players committed to the picker.  There are ways to accomplish this whether the defense switches,  doesn't switch, pressures and goes over the pick as well as when the on ball defender goes under the pick.  The biggest key is slowing down and trying to get two players on you!  I'm in process of detailing this concept in JM3 Coaches Training Program.

This was one a visit I've been looking forward to for a long time!  What Andy Shay has done at Yale has been so impressive.  He has cracked the code for recruiting, player development, strength and conditioning, culture, and x's and o's.   What sticks out most is a culture of player driven accountability and leadership.  At practice, Andy would get the next drill going and explain the terms quickly and efficiently, but it was the players who would enforce those terms.  As a spectator for one practice it was obvious and incredibly impressive.

I was pretty fired up to get down to D.C. and see my boy, who transferred to Georgetown after two years at UNC.  I got a chance to hang around the lacrosse office for a few hours and talk shop with Coach Warne, Phipps, and Shriver.  Great guys!  Totally down to earth, thorough, and competitive!  Coach Warne keep practice to about 90 minutes of fast paced, high reps and some great drills!

Below is a video of Coach Warne teaching 1v1 positioning.  In this drill they are using football blocking pads to work on physicality.

I've had some incredible guests over the past few weeks that I want you all to catch up on!

Hannah Nielsen, The Head Women's Lacrosse Coach at Michigan, is one of the greatest women's lacrosse players of all time, was a 4x National Champion at Northwestern and a 2x Tewaaraton Award winner.  Known for her lacrosse IQ, feeding ability, and competitiveness, Nielsen talks about growing up in Adelaide, Australia, playing tons of different sports, her mentors and what he'd her into coaching!  Click here for the Hannah Nielsen Podcast.

Joe Amplo, the new Head Men's Lacrosse Coach at Navy is a master a building programs.  His focus on building culture over all else comes through clear as day in this podcast.  Turning Marquette into a national power as quickly as he did was impressive!  Amplo has a great staff at Navy in former Denver Defensive Coordinator Jon Orsen and former Ohio State Offensive Coordinator Brad Ross.  Click here to learn more about how Amplo intends to build Navy Lacrosse in his image.

Bobby Shriver, former Boys Latin Coach, is simply one of the best high school coaches of all time, but an even better person!  Shriver has coached some of the greatest high school teams ever, like the '97 BL team.  Bobby talks about his mentors, his teams, his players and more.  Click here for the Bobby Shriver Podcast!

I've had a flurry of requests for the Video Assessment product and folks have been so happy! with the results.  If you haven't had this done for your son or daughter, you're missing out big time!  Check out this email from one happy customer!

We have so much confidence that you will love this product, we have a full refund if you are not satisfied!  Click here for more info on JM3 Video Assessments!