Merry Christmas and Happy Holidays to everyone!  While 2020 has been crazy, this is always a good time of year to take a step back and be thankful for all we have.  Lacrosse is a sport that has provided me too many relationships and opportunities to list here.  My time at Hopkins was incredibly special.  The early 2000's were a great time to be at Homewood as I got to be part of the team and success built by President Bill Brody, Jerry Schnydman, Tom Calder, Dave Pietramala, and many others.  I am equally blessed to have moved on to Atlanta as this has provided a huge opportunity for my wife and our family.  Lacrosse is growing rapidly in the southeast.  I have met many great people already and I can't wait for this spring.

Throughout the transition, there was great support and outreach from those in the lacrosse community.  The last month with Jamie and his JM3 athletes have been incredible.  I am so thankful for the opportunity to help Jamie build his Coaches Training Program, to work with the JM3 Athletes, and to take a deeper dive into the sport of lacrosse.  Take a minute during these holidays to think about what lacrosse has done and can do for you.  No one could predict 2020.  2021 is unknown, but lacrosse will be there for us.  What can we learn?  How can improve?  What new relationships will we form in 2021? 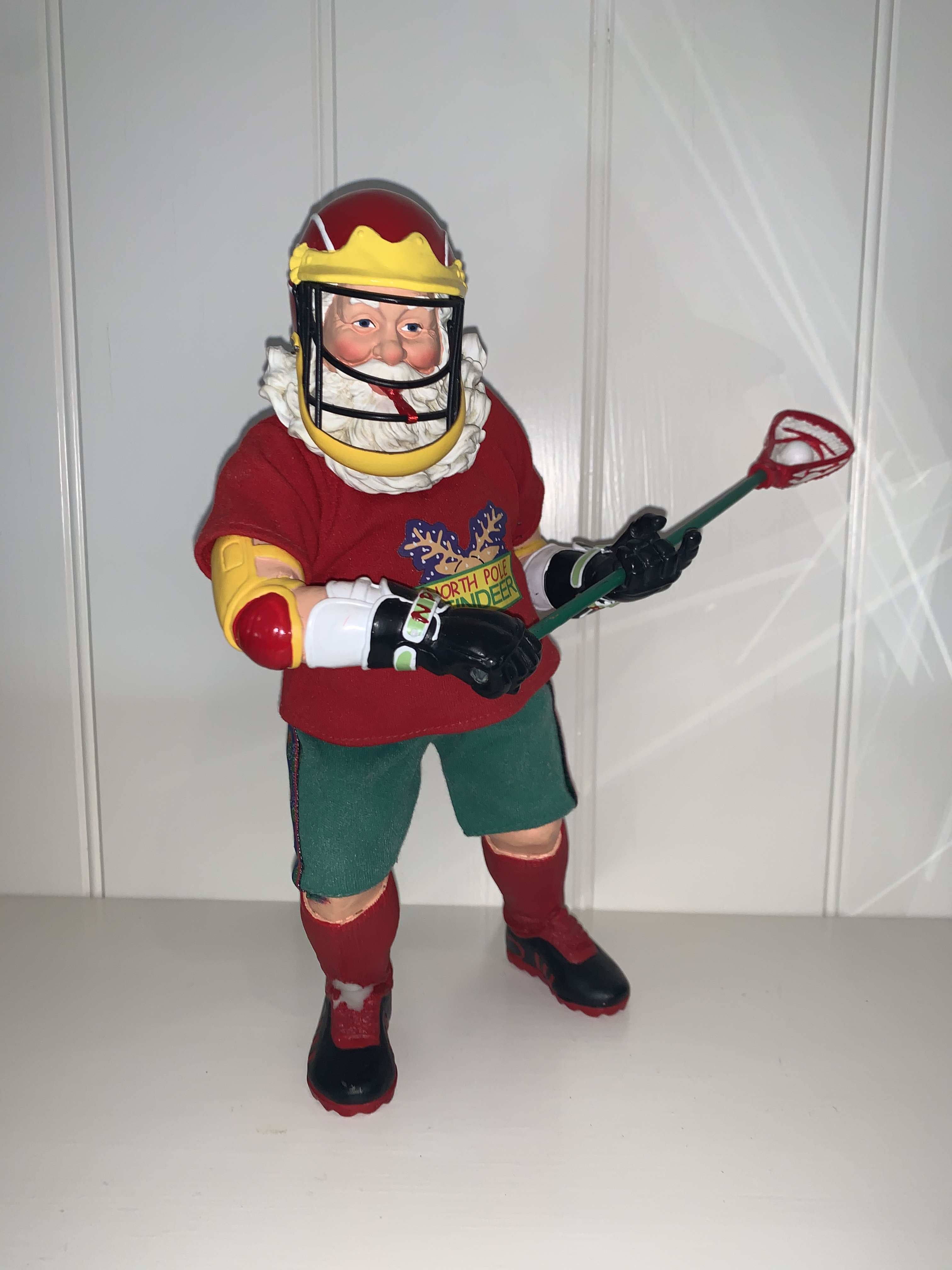 The Impact of Hitches on Goalies

In the November7th, 2020 edition of "A Lacrosse Weekend,"  I wrote about a myriad of different variations of hitches: Multi Hitches, Underhand Hitches, Jump Shot Hitches, and On The Run Hitches.  Hitches are a combination of a hesitation move and a shot fake and they are powerful in not only impacting the on ball, approaching, or help defenders, but also, and maybe most importantly, the goalie.

Watch the goalie jump out of his shoes on Miles Thompson's hitch before the shot!

Think about it: If you can make a goalie move, flinch, step, jump, lean, dip, etc right before the shot, it is a big advantage for the shooter.

Watch this example of Corey Small using the Powless Pump hitch technique as well as the response from the goalie.  On the first hitch, the goalie flinches with a subtle weight shift to his left foot which leaves him unable to respond to the actual shot.

It is interesting that most coaches in field lacrosse do not talk about this technique.  Box players use the "Multi Hitch" or  "Powless Pump" technique so regularly it has become routine, yet US shooters focus solely on getting their shot off as quickly as possible with accuracy and power.  In box lacrosse the focus is on angle and deception and year after year Canadian and Native box players shoot at 34% and change while US field players shoot at a consistent 28% and change.  Here are stats from a Michael Mauboussin's deck that was focused on the 2018 Yale Lacrosse National Championship team. 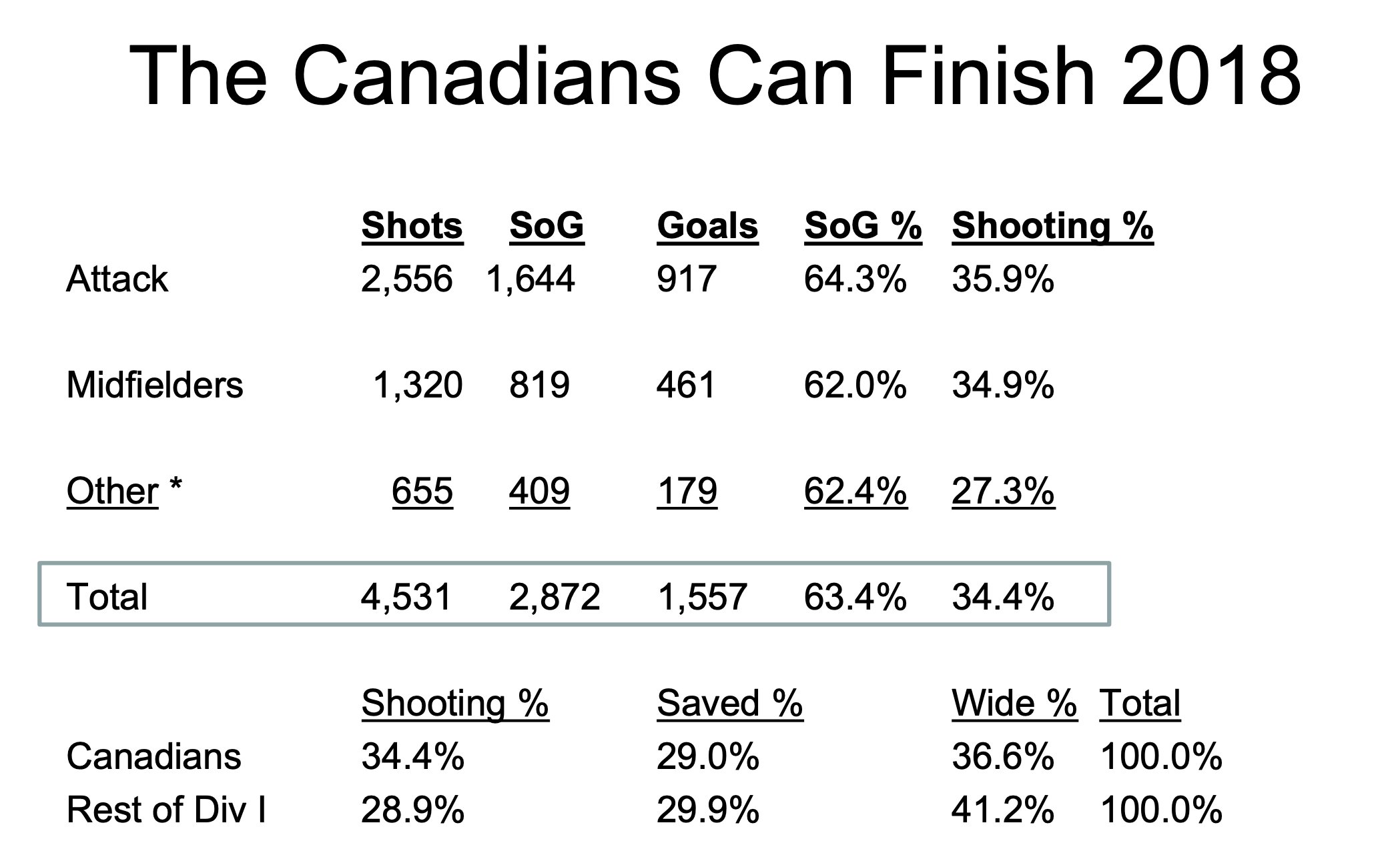 The On The Run Hitch Impact on a goalie

Having realized the power of Powless Pumps and Multi Hitches on goalies, I decided to study what the impact of On The Run Hitches had on a goalie and it is amazing!  Watch the PLL Atlas goalie react to Tommy Schreiber's On The Run Hitch!

On The Run Hitches and Finishing

As I usually do when I discover something like the "On The Run Hitch impact on goalies," I begin to think of and look for other applications of the technique.  I decided to investigate the concept in the scope of finishing on a goalie.

I have long known that the power of pause is critical in finishing on a goalie.  I've also thought for a long time that the BTB Fake Finish is the best way for an American to finish on a Canadian box goalie.  Now what I realize is the On The Run Hitch, the hesitation on the Jump Shoot Foot, is an amazing way to freeze a goalie.

The way I get my JM3 Athletes to learn how to become great finishers is to get a small net and play finishing games with family members.  I call it Shooting on Dad, but you gotta give dad a chance to work on his finishing too!

In the video below, I was working on various finishes including the On The Run Hitch or Jump Shoot Foot Hesitation to freeze my daughter Lucy.

The game we play is:

It's a total blast and amazingly effective!  For more games like this, check out the Backyard Curriculum!

Christmas is over and it's time to begin preparation for 2021 and beyond!   I believe that there will be HS and college lacrosse seasons across the country, and I also believe summer lacrosse will be in full swing with college coaches finally allowed to evaluate athletes in person!  Thousands of players across the nation are dreaming of playing college lacrosse and it is going to be more competitive than ever!

If you want too see how I help my JM3 Athletes prepare check out the information below:

In the JM3 Athlete Program, we focus on four key principles to prepare:

What if there was a guaranteed way to get faster?

A year ago I saw a tweet from world renowned strength and conditioning coach, Mike Boyle that said, "Timing 10 yard sprints has been the biggest impact on our programming in 20 years."

Listen to this podcast on Speed with Mike Boyle!

I immediately began searching for someone to introduce me to Mike Boyle so I could learn more!  Mike and I have since become friends and he remote coaches my daughter Lucy through TrainHeroic and MBSC online programming while I help his son Mark with video analysis and zoom calls through my JM3 Athlete Program.

Mike has a world class online Strength & Conditioning program that my own kids use as well as many of my JM3 Athletes at LacrosseAthlete.com .

If you are a coach and are looking for a strength and conditioning solution for your program, email Ken at [email protected].  Ken runs MBSC online and is a strength coach for the Boston Bruins.

Mike always says, if you had to choose one thing, choose timed 10's!  It's simple: you can't get faster if you don't run your fastest (100%), you can't know if you're running your fastest with out a timing system to the 100th of a second.

Mike Boyle recommends a Brower Timing System and I bought two of them because it is a guarantee an athlete will get faster!

Check out the video below of Lucy demonstrating how easy it is use a Brower!

If you want to play your best in the summer of 2021, engage in the process of "Unlocking" your game with Free Play.  This has been a game changer for my JM3 Athletes.  Just ask the kids or their parents!

What do i mean by unlocking your game?  Kids are taught "Fundamentals" and are told what to do and what not to do incessantly beginning when they first picked up a stick.  Structure like this literally locks up their game.  Focusing on a techniques, such as "Over hand passing, literally teaches kids to fit a square pegs in a round holes.  There are no one-size-fits-all techniques or fundamentals because there are literally no two situations that will ever be the same.

Most people believe players must rep out a skill or a fundamental to be able to execute in a game.  I was once a person who believed that too, but my thinking has evolved as I've watched closely to what actually happens and what actually works regarding player development.  In other words, instead of judging what a player knows how to do or can do, I judge what the do in games.

Kids rep out skills ad nauseam, like BTB passes and shots that they never use in games, yet I see kids do things they have never done before regularly in both Free Play pick up games and in real games!

I know many of you reading this blog will not use the Free Play model!  Most people can't wrap their head around the value of implicit learning, but for those who do, it is like a miracle.

I highly encourage you to listen to my podcast on Free Play!

Check out the video below of JM3 Athletes, friends and family playing a sick game of 5x down in Delray Beach, FL.

iF you want to learn how to leverage the power of Free Play at your house, The Backyard Curriculum will be the best $47 you ever spent.  This course on how to create a Do-it-at-home lacrosse development program is literally the blueprint I use for my own kids and my JM3 Athletes

By far the best way to understand your game and the game is through video analysis.

Imagine your son or daughter having their game broken down like the one I did for UVA All-American attackman, Michael Kraus:

This level of  analysis and detail is usually reserved for DI players watching practice film or game film in the lacrosse office with their respective Offensive or Defensive Coordinators!  I used to do these breakdowns as a stand alone service called a Video Assessment Product that anyone could purchase, but I have discontinued that service to focus on my JM3 Athletes.

While the Video Assessments were very well received and quite effective at educating players on what they do well, what they could do more of, what they could do even better, etc, I don't love working on a one-off basis with athletes.   I much prefer working with an athlete over the course of time, getting to know them as people, and diving deeper into their game, which I do with my JM3 Athletes Program.

One amazing thing that happens over the course of months of doing weekly zoom calls with my JM3 Athletes is they truly learn to "Speak the language" that coaches speak.  The ability for recruits to articulate their game and the game can be an advantage in the recruiting process, if you get to the point where you are being interviewed.  UVA Head Coach Lars Tiffany once told me that he has recruits stand at the white board and diagram defensive situations to evaluate their IQ.

A few weeks back in my blog I wrote in depth about the realities of advocacy in college lacrosse recruiting.  Please review this blog to fully understand the role of advocated.

One of the things that I do to help my JM3 Athletes is to help them plan their summers, help them optimize their club lacrosse situations, and leverage my vast network to connect them with potential advocates.  I have found that having multiple, credible advocates is advantageous because when college coaches are hearing about a player from more than one sources that they trust, it is helpful.  Remember, coaches are usually looking for confirmation of what they already think, which is why being good enough is the biggest key!

The addition of Bobby Benson to the JM3 Athlete Program will be hugely impactful.  Bobby is as well respected and well connected as anyone in the game.  On the girls side, we will have an exciting announcement coming soon where JM3 is set to work with, in my opinion, the best in the women's lacrosse coaching and club business.  Stay tuned

If you want more info on the JM3 Athlete Program, email me at [email protected].  I do not have openings at this time, butt I will begin looking at applications in January.