Last week we ran the fourth Virtual Lacrosse Summit of 2019 and it was awesome!  There will be free replays of all summit talks coming up next week, so keep an eye out for the email!

It's impossible to say which talks were the best. but here are a few thoughts!

I caught the end of the 3rd quarter and 4th quarter of this game and although it wasn't a high scoring affair, it was fun to watch!  The US prevailed in the end, but the young Canadian squad made up of mostly college kids competed at a remarkable level.  Impressive was their patience and game management.  The Canucks knew they had to slow the ball down (and international rules allow this) and they had the disciple to this, but they also had the skill to withstand pressure from some of the best defensemen and athletes in the world.

The Canadians didn't "Run by their man" as most coaches would say, but they were able to generate offense through one of a few ways: 2man game, re-dodging, posting up, and waiting for a US defender to try to take it away.

Watch this clip of how Jeff Teat beats his man 1v1 with a series of moves.  This is a perfect example of manipulating and controlling both his defender and the slide.  Teat operates in his Double Threat posture, staying as close as possible to his man without allowing him to cross check, his "Open up" to a feeding posture both serves as a hesitation move with an underneath angle and a means to get the slider back to his man.

The pass to X is a never taught, counterintuitive, but incredibly effective technique.  Check out this tweet from Joe Keegan of the PLL media team.  Joe knows I believe a pass to X with the inside hand opens up more opportunities than a pass to X with the outside hand because it causes defenders to commit to the slide longer.  Watch the video and look how Teat generates full commitment from three players on this dodge and dump! 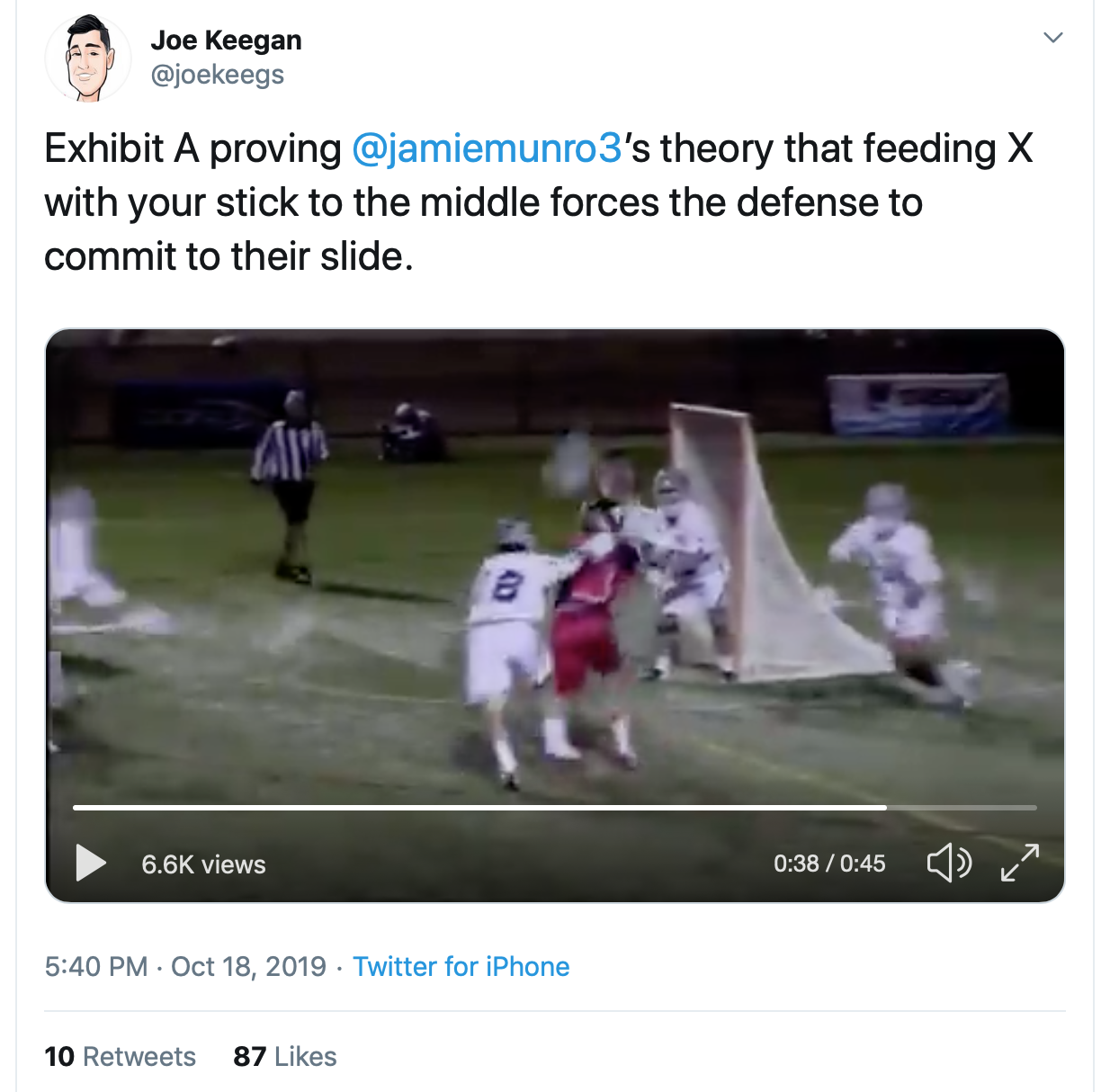 I am very interested in this concept of "Fluency" in sports.  Ted Kroeten, Founder and Artistic Director for Joy of the People, a soccer club in Minnesota, introduced me to this concept when I did a Phi-Lacrosse-ophy Podcast with him a few weeks ago.  Similar to second language acquisition where most of us studied a foreign language memorizing the rules, vocabulary, and grammar, but never achieving fluency, kids who practice in structure, dodging cones, and in environments devoid of decision making, will be limited in their fluency potential.  You see, fluency is about the "Input" which is the receiving and processing of information, not the output of executing. Think about your trip to Mexico, where you could string together words but could not understand what anyone said to you!

The literal element of Fluency is sports is the constant communication that is occurring.  Not just the verbal communication between teammates, but the non verbal communication players have with the opposition.  This is also known as deception!  If a player has "Fluency" he/she will essentially communicate with their opponent in order to manipulate them. Go back and watch the Jeff Teat clip where he simultaneously manipulates his man, the sliders, and second sliders while attacking the net and creating a scoring chance by drawing a triple team.

There is a very simple process that occurs on the field in a game that I want you to think about:

Step one, perceiving and processing involves an incredible amount stuff happening at one time.  Let's say you have the ball you must simultaneously recognize how your man playing you, the off ball defenders and sliders, your outlets, the open space,  the verbal and non verbal communication with teammates..... the list goes on and on!  It's actually quite amazing if you really think about it!

Step two, making a decision, involves not only making a good "Read" of the situation, but also confidence and personality.  If a player is fluent, he/she will be decisive, simply making the play that needs to be made.  If a player lacks fluency, sometimes they will hesitate or defer due to a lack of confidence, or they will force it trying too hard to make a play that isn't there.

In either case, the player that forces it or the player who won't dodge or shoot when it's clearly the opportune moment,  will more shooting and dodging reps be the solution?  I don't think so!  Let's continue to dig in!

Behind The Back Feeding

Another example illustrating my point: have you ever noticed how few players feed behind the back?  It seems to be a skill reserved for world class players in the NLL or PLL/MLL, yet most serious high school and middle school boys and girls can execute this skill on command no problem. In my opinion, behind the back feeding is one of the most impactful weapons in any player's arsenal because it it is a combination of being un-guard-able by the on ball defender while being nearly impossible for off ball defenders to to react to.  In essence, BTB feeding buys time for the receiver resulting in a better chance of scoring!

Therefore, Step three, the actual execution of a skill or technique is the least important part of this process, yet it is the focal point of #Reps for most coaches!  In fact, one could argue that working on skills in isolation has an opportunity cost that will slow down development since that athlete will not be working on perception and decision making.

Last night's 1 goal game, where Team USA nipped Team Canada in a comeback victory is further proof that box lacrosse is a better learning environment than field lacrosse.  There are fewer than 100 thousand players in Canada while there are close to 1 million players in the US.  When we think of box as a better environment, we attribute it to the goal size, boards and glass, all short sticks and small sided-ness as the chief factors, and I would mostly agree.  However, I would add that the  shot clock might be the most powerful part of the environment.  The shot clock in box lacrosse makes the game itself less structured and less controllable by coaches and less "Risk averse" therefore allowing players to learn on their own through the environment itself.

I've always said, "Box time is 'Double Time' and I now understand this in a different way.  I used to think it was just because of the number of reps of shots, passes, etc, but really it's a massive  increase in perception and decision making on and off ball combined with the challenge of scoring a small net with a big goalie.

Free Play is truly a miracle that most people cannot wrap their head around.  Most folks will agree Free Play is a very good thing, but when push comes to shove, coaches and parents feel better about structure, about #Reps, instruction, and high level competition.  The environment of Free Play is that of "Joy", "Acquisition", experimentation, and learning.  Playing small games like in the video below with small nets, no equipment, and tennis balls is truly a version of box lacrosse.  Look at the skills, teamwork, and fluency being illustrated!

Evolving as a Lacrosse Coach

About 20 months ago I embarked on a journey of massive content creation for coaches in the sport of lacrosse.  The JM3 Coaches Training Program was born and my goal was to share all of my knowledge and experience with lacrosse coaches of all levels.  As coaches it is our job to set the example of learning and getting better for our teams!

Check out this 2 minute video "Walk-through" of the content.  It's awesome!

I am a person who is  constantly learning!  I learn through coaching my high school team, remote coaching JM3 Athletes, watching film of all kinds, from reading, and from doing about 100 webinars per year with the best players and coaches in men's lacrosse, women's lacrosse, box lacrosse , field lacrosse.

I love learning about everything from cutting edge skills, to drills and X's and O's.  I love it all!

I have had my own personal seismic shift in coaching philosophy.  Whereas I used to try to decipher what the best teams and players in the world did and construct a smart progression to teach players, I now do not believe this is the best model.  Sure it worked in some ways, I mean I could certainly teach players every skill and concept that would look great in practice!  I just wasn't happy with the translation percentage.  I bet my players used more repertoire than most, but still, the percentage was lower than it should have been.

How many times have you heard these statements: "If we had only executed in the game what we executed in practice, we would have won."  Or, "Coaches win practice, players win games." Or "You practice how you play."

We as coaches should seriously think about these quotes.  Why do we execute in practice and not in games?  How is it that coaches win practice?  Do we actually practice how we play?

If we as coaches can commit to both contenting to learn the nuances of the game while creating competitive environments of decision making, fun, and realistic situations, where we are not looking for perfection or "Getting it right" we will have more success on the field.

As I work through this process of taking all my knowledge and trying to figure out how to teach without teaching will be sharing my findings, my successes and failures, every step of the way!

Have a Great Weekend!