If you are a men's or women's lacrosse player, coach, or parent, I think you will love the weekly content, videos, and analysis! Click here to read my blog.

Inside The 8 Podcast With Colleen Magarity

This week's guest is Ohio State Defensive Coordinator, Gabby Capuzzi!  We had great conversation about planning a season, her philosophies on defense and offense, riding / clearing and college lacrosse recruiting.

Colleen and I discuss Gabby's takes as well as our own philosophies on preparing for a season, sharpening the saw, and a great discussion on college lacrosse recruiting! 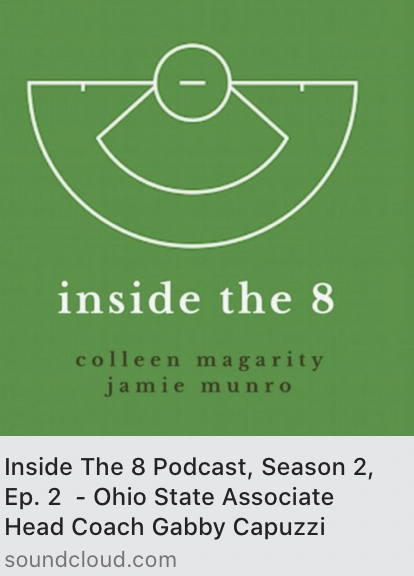 I have been in a perpetual search for information on the game of lacrosse for my entire adult life, looking for the best models for athletic and lacrosse development.  Men's lacrosse, women's lacrosse, box lacrosse, I am fascinated by all of it and I spend as much time as possible studying film, working or playing in the "Lab" (on the field), doing podcasts and webinars with the game's greatest coaches and players, and working with my JM3 Athletes and JM3 Coaches.

This quest for the Holy Grail of Lacrosse Information began when I was hired as Offensive Coordinator at Yale University when I was 23 in 1991 under Head Coach Michael "Bones" Waldvogel.  Anyone who knows "Bones" a 2x World Teamer and who took Yale to the Final Four in 1990, knows he was a lacrosse genius who saw the game in a unique way.

In 1993 I was approached by a couple college buddies, EJ Heiser and Joe Madden (son of NFL HOF'er John Madden) about creating a lacrosse video series.  This project was a game changer for me as a young coach as I had to try and put together my thoughts for a development model for the whole game!

In going through this video for the first time in decades, it was fun to take a stroll down memory lane and it is also amazing how relevant the content still is!  No doubt the game has evolved and skill across the board is a lot higher, but the Gaits, Zulberti, Marachek, McCabe, Towers, Lowe, Hiller and McAleavey would be stars today with their skill set from yesteryear.  I hope you check this video out, it's pretty awesome!

You will love the practice footage of drills back in the day and insane skills on display from players like: Dennis Goldstein, Chip Mayer, Joe Breschi, Jim McAleavey, Mark Millon, Andy Towers, Jay Stalfort from the fall of 1994

Thanks to former ESPNU Producer, John Vassallo, for providing the NESN footage of classic game clips from the late 80's and early 90's!

Here's the entire two hour video series!  This was content ahead of it's time!  If you want to see the origins of modern lax thinking, you will find it here!

Check out the time stamps for some highlights!

The Evolution of the JM3 Philosophy Continues

In the Fall of 2017 I had the rare opportunity to look at the world through a different lens.  I had sold 3d Lacrosse, I had stepped down as head coach of Mountain Vista HS when my son graduated and headed off to college, and I had finished up a summer of coaching with the late great Dave Huntley in the MLL with the Atlanta Blaze.  My youngest daughter was entering 9th grade and I was starting a new business called JM3 Sports, a remote coaching and online education business.

I took time to reflect on all I had learned from my days at Yale, Denver, 3d and coaching high school.  I had amassed knowledge of virtually every variation of every skill and concept from the best teams and players in the world with teaching smart progressions that could help high school players learn it all!  Practices were efficient, improvement in practices (all filmed) was apparent, and my desire to figure out the best

The one fact that always bothered me, however, was the translation from practice to games.  Why was it that my players could do every skill in the book during drills in practice, but would only use a fraction of those skills in games?  Truthfully, my players probably used a lot more skills than most kids, but still, I wasn't even closed to satisfied.

Here's an example: we would do this Approach 1v1 Drill quite a bit to work on Wind up moves.  It's a good drill and by using tennis balls we also learned to shoot screen shots.  What I always wanted players to learn was how to Multi-Hitch, which is the act of hitching twice or more in order to find your screen, or keep the entire defense at bay.

Even though I think this drill is a great way to simulate approaches on defense, in my present state of thinking I would probably not run it anymore for two reasons.  First, I don't like the idea of scripting a situation for players to execute a skill or concept,  It's an example of what I mean about structure doesn't translate to real games.  Second, I don't think this drill (or any 1v1) for that matter provides enough context of other defenders or teammates.

The 4v4 From Behind Game in the video above is a perfect example.  With a boundary of 10 yards above the GLE and two poles with two shorts on defense, we are simulating Big-Little inverts and crease play in a competitive situation!  By winning and losing, players learn to compete, communicate, and adjust on both sides of the ball.  By using film to teach, we can show them after the fact exactly what happened.  This is how I use Free Play concepts in a regular practice situation.

How can you get players to learn to use Multi-Hitches like this?

If you want to know how players will learn how to use Multi Hitches, watch the video below from Free Play environments.  For the record, I talk to my JM3 Athletes constantly about deception and specifically about using Multi Hitches when I do my Zoom calls with them, but we do not coach or even mention skills like these.  We play and eventually they do it!

The fall of 2017 I began to create Free Play environments for my daughter, her friends and my JM3 Athletes.  Even when I'm coaching a team or a large group with full equipment, I design a competitive environment with a winner and a loser along with context generated by the rules of the game.

If your players learn it (any skill or concept) on their own, meaning if they do it on their own, (without your prompting), they will likely do it in a game!

Simply put, I teach JM3 Athletes to play lacrosse (or other sports) games outside of structure and coaching in context where the learning is implicit.  Then we watch the film and breakdown what happened and why.

If you are a coach, a parent, or a player, I highly recommend that you consume the content below.  It will open your eyes to amazing possibilities.  This is literally the road map of everything you need to be great!

I did another incredible webinar with PLL Redwoods defenseman Eddy Glazener a couple weeks ago and we talked about a key concept in 1v1 defense and I wanted to share it with you.  So many defenders get in trouble by prematurely jumping over the back of the goal while covering a quick attackman like Mikey Sowers in the video below.  Notice on both clips, the on ball defender needs to jump the goal and cut through the crease to take a good angle on the dodger.  In the first clips though, the defender has to do this after having jumped the back of the net once already and having to fight the momentum from this jump.  In the second clip, the defender is patient while Sowers is in the Kill Zone, waiting for him to commit to his left hand.  This time, without having to fight against a previous cut, the defender can recover by taking the angle through the crease.

Kayla Treanor is one of my all time favorite women's lacrosse player and this video teaches her trademark split dodge that I call the KT Split!  This move has applications to men's and women's lacrosse and is rooted in the idea of double moves.  Check this out from the JM3 Youtube Channel!