I've gotten to know Tim McCormack over the past few years really well in my time consulting with Northwestern Women's Lacrosse.  Tim is simply one of the best people you will ever meet!  Tim is caring, hard working, always curious and interested, and makes you feel like family.  This podcast talks about how he went from a Long Island kid at UMASS to being the Head Coach At ASU!   Tim discusses his mentors, his philosophies, and talks a lot of 2man game!  Click here to enjoy the Tim McCormack Podcast. 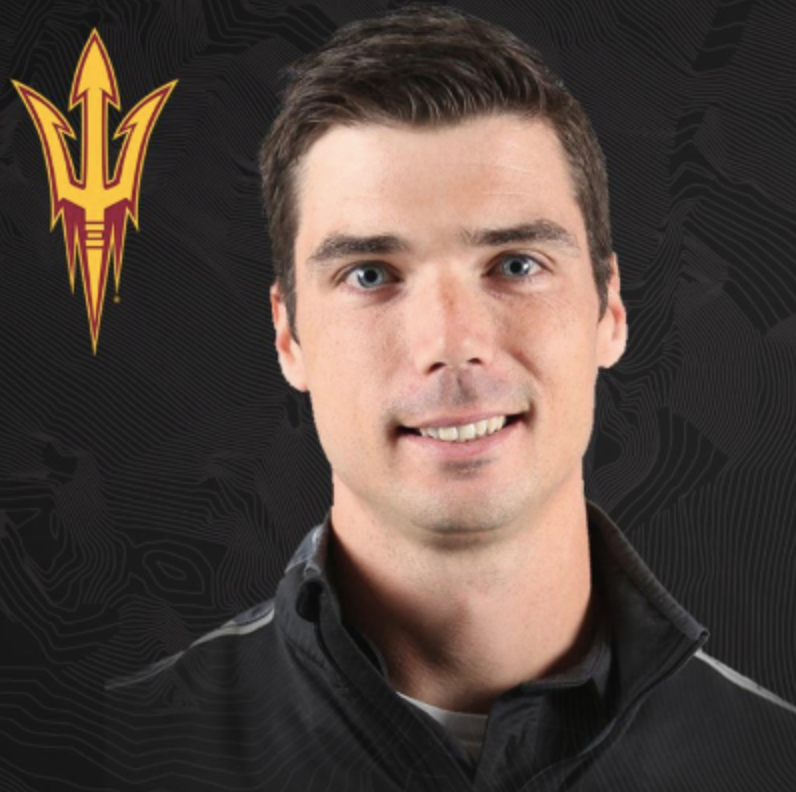 I hadn't been up to Lake Placid since 2010!  It was SO great to get up to the north country, to see so many great friends, and to play lacrosse!  I played with the Brown State team in the 45+ Gold Division and as defending champions, our sights were set on a repeat.  For me, playing lacrosse is something I've been doing a ton of with my kids in the sandlot, but strapping on the equipment, wearing cleats, getting whacked AND having the presence of mind to use appropriate skills would be something I had to get used to again. 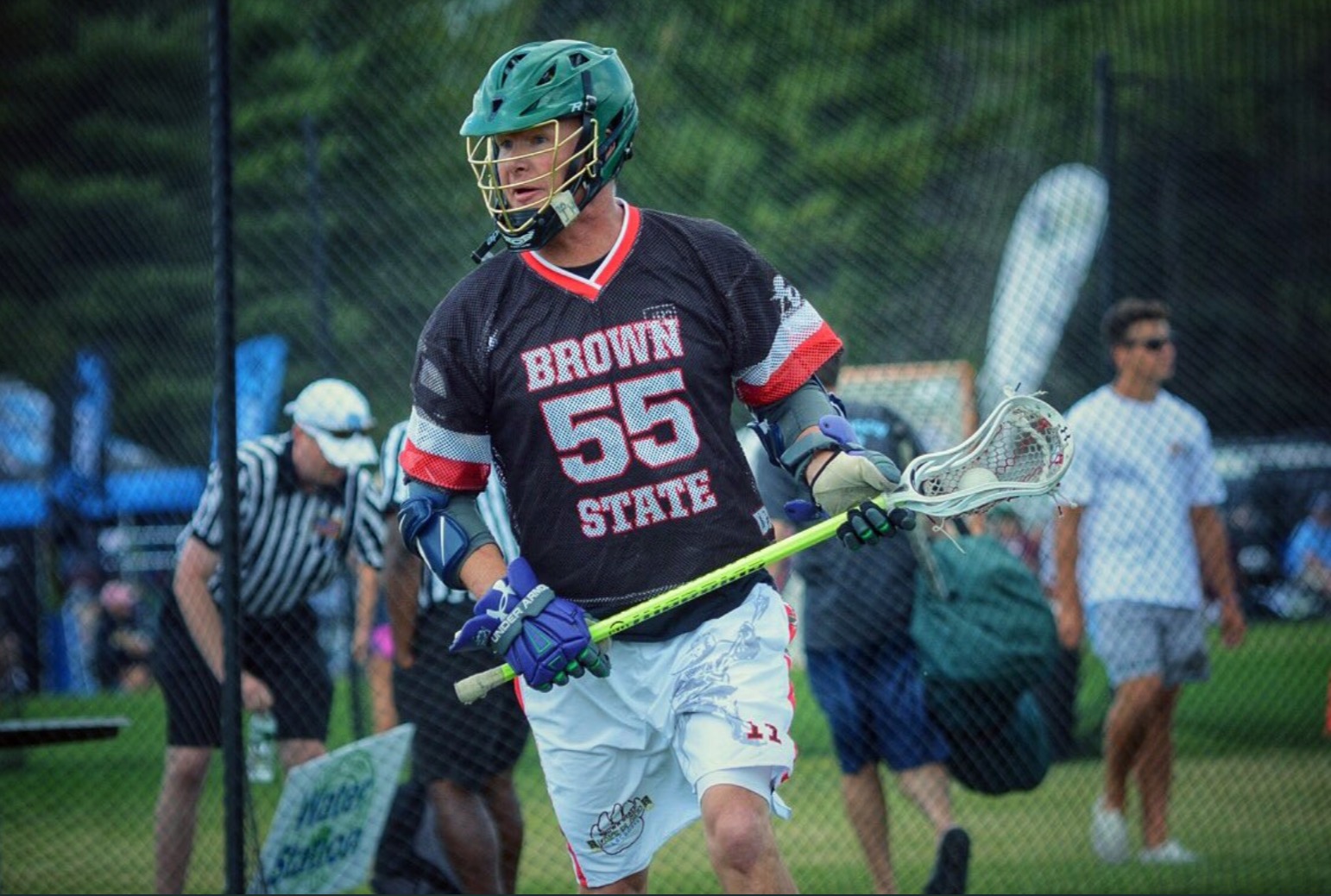 Our team was pretty balanced.  Our goaltending lead by Team MVP and CEO of Asia Time, Jon Kanaras, who was lights out all tourney long as was Eric Gorman!  Defensively, Dave Kotowski locked dudes down, Lars Tiffany talking, directing, handling the ball running the break, Dennis Sullivan still all around on ball/off ball with ball, Dennis Fitzgibbons the crafty lefty, Rashan Lindsey can still run, Mo Shearer is a beast! All these guys played lock down defense and executed phenomenal off ball play, COMA slides, pick offs and cleared it beautifully!

Speaking of lock down, Kris Bayer as a shorty was like having another pole out there.  We pretty much dominated face offs all week as Jeremy Rualo crushed it! we had a ton of horses in the midfield who could get up and down and played smart on both ends:  The Axia Time MVP Joe Casilino who was a total beast, Gary Nelson our fearless leader, Jimmy Loffredo was lights out, Sean Stalfort still has wheels, Tom Collard was legit, Sam Jackson was his grizzly self, Scott Prestridge slick and smart, Dave Taibl scraps and Tom Dwyer was his cool lefty self.

Finally, on attack we were lead by Dave Evans, former 1st Team All-American and MLL All-Star, Matt Herrold who scored a shit ton of goals, Jake Much who blew out his ACL two minutes into the first game (brutal!) John Hoffman the slick righty, and me playing all left!

Like all lacrosse in 45+ it was at times pretty slow and gross, but at times it was skillful and brilliant just like old times, with incredible team defense, transition, great passing and an exhibition of high level skills!

We barely squeaked by Cornell in our first game.  in our second game, we almost blew it to Team Long Island.  Then, in the semi finals we knocked off Team Pure Performance holding on to a 5-1 lead that turned into a 5-4 win. And finally, the Championship Game vs the legendary Placid program, Sailin' Shoe, which had the likes of Gerry Byrne and John Tillman on defense,   Brown State emerged victorious with a 7-3 final score.

Here's a picture of me and UVA Head Coach Lars Tiffany in a post game discussion.  I think I was talking about "Punch Moves" haha!  Lars and I were captains of the 1989 Brown Team. 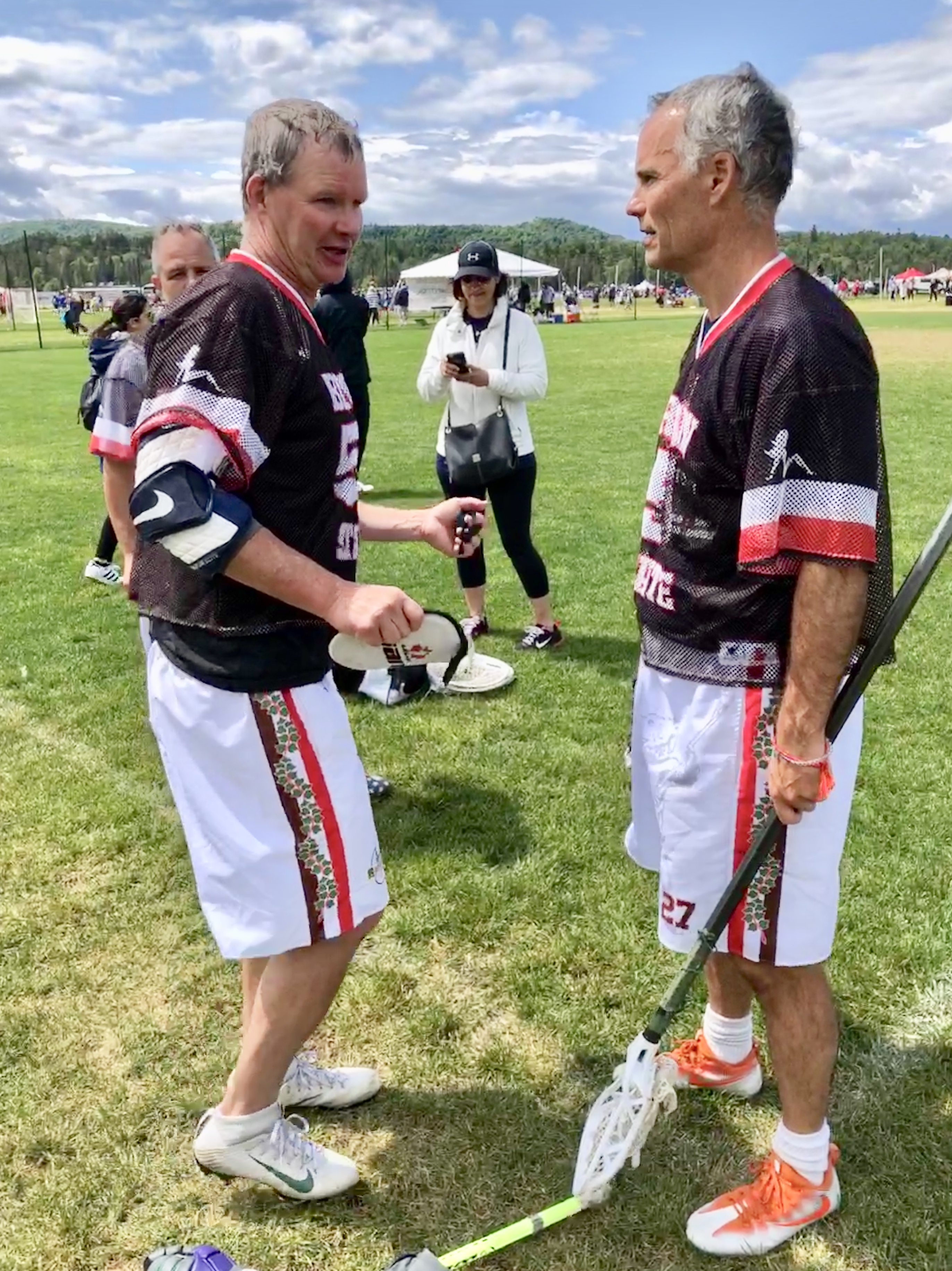 The Best Thing I saw this week

Stealing a line from SVP, I have to share the best thing I saw this week!  This kid, Ryan Sheridan, who is headed to Hofstra is a special player.  He plays for Nanaimo Jr A and led his team to the playoffs for the first time, pushing the perennial power Coquitlam Adanacs to their fist game six in years.  Sheridan is athletic and very skilled.  Below, is an off the charts highlight of him scoring in a WLA Sr A playoff game versus Victoria.  Sr A is basically professional lacrosse.  Just about every player is in the NLL and this kid gets called up and does this?  Holy #$&*!

One of the first dodges everyone learns is the face dodge, and while it is a great move that should be in everyone's repertoire there are some incredibly interesting details that are often overlooked.  Let's dive in!

Multiple Hitches in your wind up will set up a better Face Dodge!  The reason is the "Multiple Fake Theory" that everyone can recover from one fake, but will bite hard on the second or third fake.  There is no difference in setting up a Face Dodge.

Many of the best NLL Players execute a "Hard Pump" to sell their shot and set up a Face Dodge.  This is where the dodger after having hitched a couple of times, aggressively rotates his back shoulder forward to sell shot while he turns his top hand wrist in to control the ball.  This seems to set up a Face Dodge better than simply executing a Face Doge motion because it sells shot longer.

The Hard Pump Face Dodge or the Exaggerated Face Dodge ends up being more about your torso turning or your core turning your shoulders than it is about big arm movements.   I've even seen some players when jammed up actually arch their back to make room for their stick to get through.

Check out Curtis Dickson on this multi hitch Face Dodge!  Notice how he sells shot and turns his shoulder with his stick vertical!

Selena Lasota with 2-3 hitches to set up this beauty!

For boys and girls players, learning how to sell your shot with a few extra hitches and how to use your Hard Pump will cause players to duck big time while you make it look easy!  If you are a Coach, and you want to learn how to teach skills like these, click here!

If you have a son or daughter who needs to know these types of cutting edge skills and how to practice them I have some solutions!  Click here to learn about the JM3 Academy.