We just finished another epic Summit with some of the best presentations we've ever had.  Click here to get access to this incredible line up of speakers!

A Summer in Canada

My daughters and I spent the month of June in Niagara on the Lake, (NOTL) Ontario that was truly one of the best experiences a father could ever hope for!  I got to play pick up games with my daughters and their friends pretty much every day! This was the second summer that a couple of my buddies and I rented a house in NOTL so our daughters could play girls box lacrosse in St. Catharines, ON and it was the ultimate opportunity for the kids to get better at lacrosse and have an awesome summer!

I purposely gave the girls their space by going them access to my car and working at my buddy Sean Allen's house during the days.  There was a really solid group of girls AND boys who worked out together, hung out together and got better at lacrosse together.  There were a fair number of visitors to, which created a really fun dynamic on and off the sandlot and box arena!

One of the best things this motivated group of kids would do is at 1030am every morning, they would do their own work out: lift, agility, wall ball, yoga, or sprints then they would go to the beach on nice days or go to a mall if it was raining.  They had the freedom to (and my car!) to cruise around and explore.

Then at 330pm every day we played lacrosse!  Some days, if we had a box goalie available we would play box and local St Catharine's Midget age boys would show up making for a really cool environment!   On most days we played pick up games, which is basically box lacrosse with out the pads

This past week I did a webinar for the Virtual Lacrosse Summit titled, "Teaching Girls Box Lacrosse".   Click here to access FREE content from the VLS!  This webinar shows all the drills and explains the concepts behind the benefits of box lacrosse! 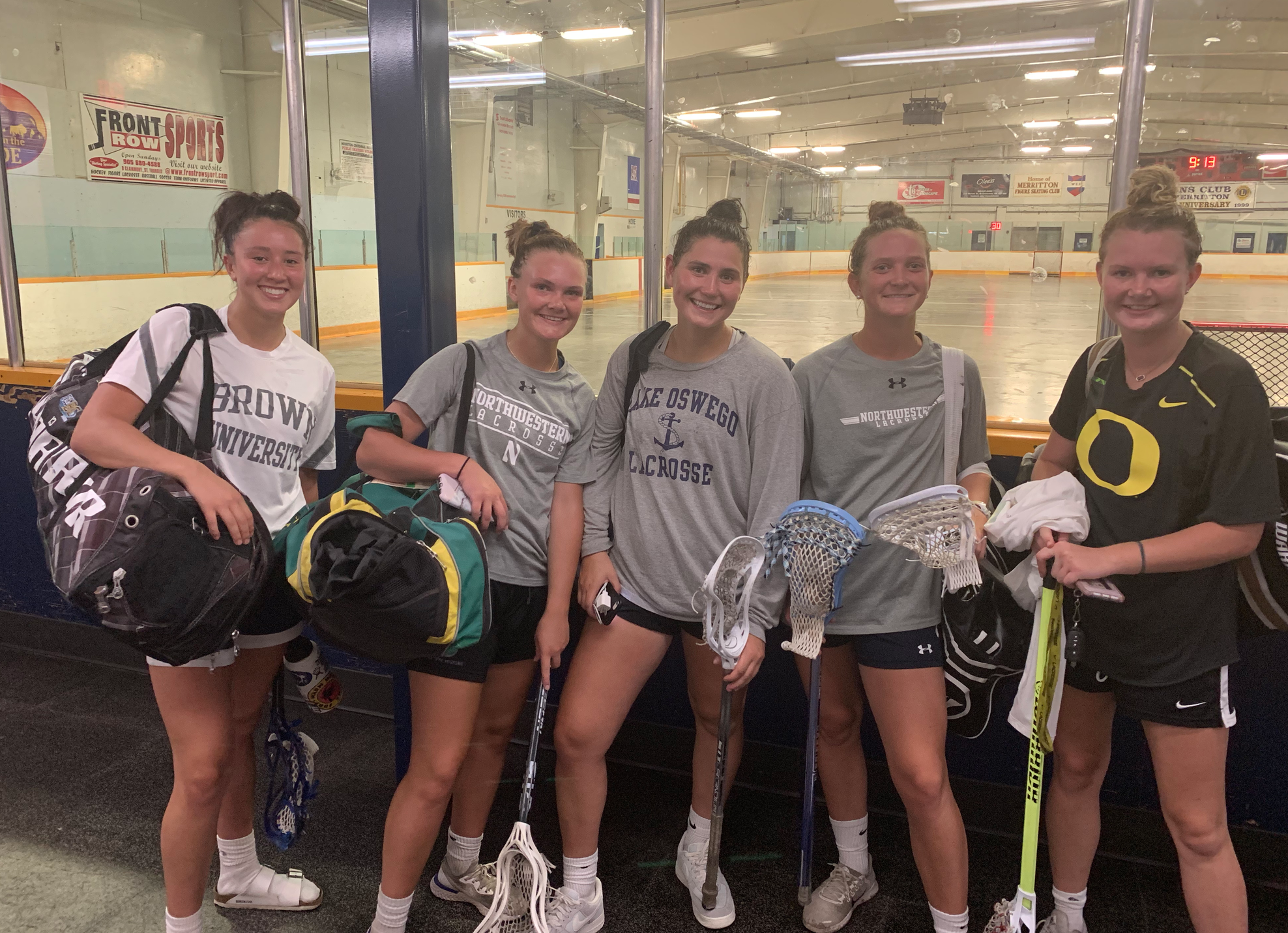 By far the most impactful and most popular activity of the summer were our daily pick up games.  We played many different versions of pick up games with different goal sizes and numbers of players that all provide an excellent environment to learn how to play.  Boys and girls played, middle school, high school and college age kids participated, Americans and Canadians, true box players and field players all took bart each day playing the creator's game!

This past week Casey Wheel, Head Strength and Conditioning at coach tweeted something along these lines that I thought was profound,  "Learning sport is like learning a language.  You're better of gaining fluency before you study the vocabulary and grammar."  Playing pick up games is how you learn the fluency.  Once you have mastered the fluency of the game you are ready to learn and most importantly incorporate the highest levels of skill and concepts.

I love talking lacrosse with great coaches and players, and in this podcast with Devon Wills, she falls into both categories: great coach AND great player.  One of the all time greatest women's lacrosse goalies, Coach Wills takes us through her journey of playing and coaching.  From Colorado Academy to Dartmouth, Denver and USC with different and meaningful experiences in leadership and coaching.  Now, finally Devon is the Head Coach of Harvard Lacrosse.  Learn what coach Wills is looking for in a player as well as her offensive, defensive, player development philosophies.  You will love this podcast!

Nations looks are utilized regularly in basketball as you can see from the video below.  One reason why Nations looks can work better than the standard Pick and Roll (PNR) is that the rest of the off ball defense has a harder time helping to the "Roll man" in a Nations look than in a classic PNR because the ball movement forces attention away from the roll man.   See below as the two low help defenders would have easily been ready to rotate the the PNR, but are basically stuck in the middle between between their man and the nations cut as the ball moved to the third player.

In the clip below, the PLL Chaos run a beautiful "Up Pick Nations" look where Myles Jones dodges the alley, Jake Froccaro sets the pick and Myles Thompson is the feeder.  There are a few notable nuances here.

Below you can see the use of an Up-pick Nations look in transition offense of girls high school lacrosse.  This is a great look to run if you have three righty's and one lefty on the attack.  This is basically the same thing that the PLL Chaos ran in the clip above.

Big-Little to an Up-Pick Nations

Here Cornell is running a Big-Little invert vs Yale's COMA slide invert defense.  Cornell kicks the ball up and over to a righty alley dodge with an up pick.  In this case, the aggressive switch is similar to what would have happened even with out the pick: the pole had to slide to the backside dodge.  I like to call it "Mirror Nations" when you basically generate a slide out of a 1v1 and a mirror and look to reverse the ball back to the open mirror man.

Topside Nations: One of the looks I really like is running an up-pick nations look for the topside dodge, but be able to skip it down to the same side feeder.  This against the grain look is an awesome variation that allows players to dodge topside off the up-pick and snap a skip pass down to the righty feeder and throw a nice right to right pass to the nations cut itself.

Re-Pick Nations: In box lacrosse, the re-pick is a deadly technique because it makes the defense play back to back pick and rolls, which is more difficult than playing one pick and roll.  Often times second pick surprises the defense and they don't communicate well.  Here were were working on a Nations look out of our Re-pick look.

Pick up Games: we play a ton of pick up games in our household and here's a great example of a 3v3 plus a goalie pick up game where the players communicate and execute a Down Pick Nations.